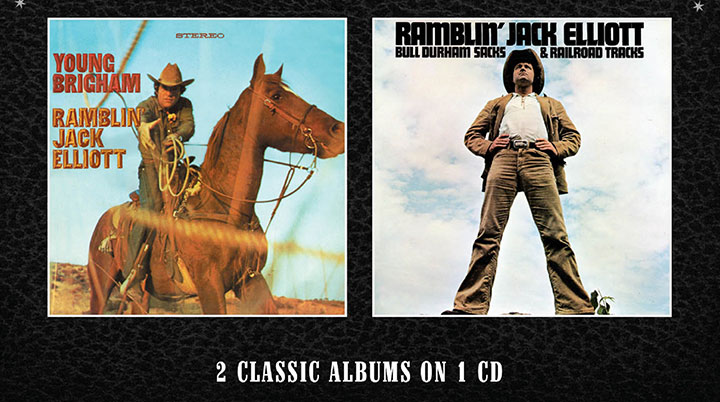 The interpretation of folk song normally comes with the ‘trad arr’ label where folk singers have taken traditional songs and come up with their own arrangements. There are few respected musicians who have not only done that but also covered the songs of contemporaries and come up smelling of roses. A casual look at the fulsome and admiring original sleeve notes from both Arlo Guthrie and Johnny Cash on this ‘two albums on one CD’ package will tell you that Ramblin’ Jack Elliott belongs to that small band of successful interpreters.

On ‘Young Brigham’, you’ll find great versions of the then contemporary ‘If I Were A Carpenter’ sitting alongside the cowboy’s lullaby to his cattle, ‘Night Herding Song’. Some fans of Lonnie Donegan’s skiffle version of ‘Rock Island Line’ will be surprised to hear Elliott’s chugging version of this American folk song. Given his reputation for a mastery of Woody Guthrie’s songs, it’s no surprise to find that this first album closes with ‘Goodnight Little Arlo’ and includes his own teasing preamble of Arlo before he hits the stride of the song. He’s equally at home with Dylan’s songs covering ‘Don’t Think Twice, It’s Alright’ on the first album before returning to ‘I’ll Be Your Baby Tonight’, ‘Lay Lady Lay’, ‘Girl From The North Country’ and ‘With God On Our Side’ on ‘Bull Durham Sacks and Railroad Tracks’. Sat alongside these, you’ll find versions of songs from the likes of Johnny Cash and Kris Kristofferson. Whilst you’ll find some covers have been bettered – Rod Stewart, not a bad interpreter of others himself, came up with a better version of ‘Reason To Believe’ – there’s no question that Elliott puts his own stamp on these records with good guitar work and a quirky persona. Of course, sometimes sounding half stoned, we get a taste of the rambling introductions that got him his name.

The point, at the time, was that Ramblin’ Jack helped build the foundations of the folk scene of clubs and coffee houses around its contemporary songwriters. Indeed, he’s still performing today in his 80’s and picking up awards for his contribution to folk music. There are tales that both Paul McCartney and Mick Jagger were influenced by their encounters with Ramblin’ Jack Elliott but all you need to know is that this package offers a bargain entrance into the American folk scene of the 1960’s via one of its much loved residents.