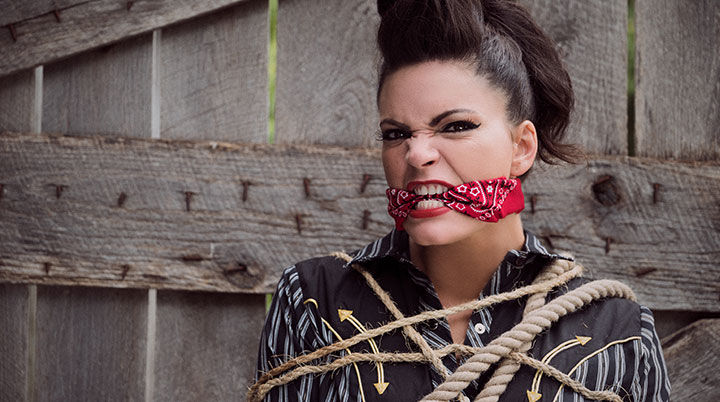 It’s easy to forget that the development of music into its diverse genres has taken place across just a couple of generations. That means younger artists are able to draw from their parents’ music collection as much as their own contemporaries. So, whilst Angaleena Presley’s ‘Wrangled’ is a tirade against the workings of Nashville, it’s much more than country as heard through the superstars of the latter part of the last century.

She started causing a stir with her friends Ashley Monroe and Miranda Lambert in the group Pistol Annies before she tackled tales of her own personal life on her first solo release, ‘American Middle Class’. ‘Wrangled’, her second solo release, is similar heart on sleeve writing but, this time, looking at the music machine that is Nashville today.

‘Mama I Tried’ spans the mood of both records, rocking out to an apologetic lyric telling of cheating, lying, making up like ‘a rodeo clown’ and throwing on ‘cheap perfume’ rather than settling down to what some would see as domestic bliss at the kitchen sink.

In complete contrast, she offers the gentlest of moods in her co-write with Guy Clark, ‘Cheer Up Little Darling’, complete with a haunting recital of some of the sad lyrics by Clark himself on what is suggested as the last song he completed before his death in 2016. In addition, the album sleeve makes clear how she sees their relationship as one where Clark mentored her in the ways of music in Nashville.

Elsewhere she falls in with more old pals, Ashley Monroe and Miranda Lambert writing ‘Dreams Don’t Come True’ with all its iconic visions that drive Nashville ambition such as having the guitar shaped swimming pool. This opening track establishes the classy production that is present throughout with its slow fade in to the fully produced song. Elsewhere, ‘Country’ kicks off with a revving motorbike before hitting a strident beat and echoed vocal that highlights the rock meets country feel before Yelawolf nails a rap that summarises the toughness of music row. See what I mean about this being more than just old school country?

Angaleena has clearly had rivalries down the years whether these are as early as we hear on the track ‘High School’ or, later, with the woman in ‘Bless My Heart’. The one with the ‘two faced, trash talking tongue’ that meant she would ‘burn Cinderella’s dress’ to ‘feel like the hottest girl at the ball’. As you’ll sense, there’s a straight talking no nonsense determination here which, married to a strong talent, should see her career on the rise with this record.