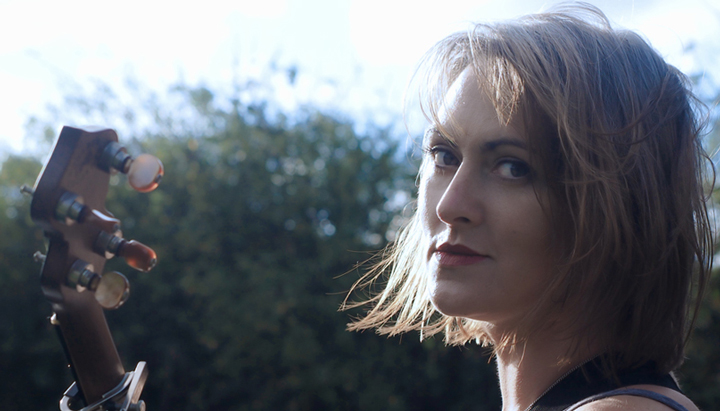 She’s never been one for doing anything straight forward and with ‘Wrackline,’ Fay Heild twists and turns her musical identity once more. The cover gives you a glimpse into what the album’s about, a selection of wild and arcane songs which centre on the supernatural and animalistic aspects of the tradition some culled straight from the archive and others craftily reprocessed. At times it reminded me of the under rated Mandy Morton and her darker material, which made Spriguns all the more intriguing, yet Heild rises above and beyond comparison to continue her singular journey and deliver what is bound to be one of the most anticipated trad releases of the year.

She’s backed – as you might expect – by heavy duty names, a small but select group, Ben Nicholls on a heavy anchor double bass, the lithe fiddle playing of Sam Sweeney and Rob Harbron’s spooked concertina. Heild herself adds back woods banjo as well as that vocal, English yet sometimes harsh and others seductive in a shadowy tone. In fact her voice is perfect to front an exploration of the ritual and magical as well as the gothic, ‘ Cruel Mother,’ being one such and titles like ‘Swirling Eddies,’ capture the inherent disorientation at the heart of the legends in which seals take human form. ‘Hare Spell,’ is the natural lift for a single it’s melodically mesmeric with a chant of a chorus, plunging the listener into a void where the known crosses the unknown, the voice ensuring the listener – if concentrating – becomes wrapped up in a lyric shape shifting and other forms. It does leave you quiet for a while after hearing it. But then the following ‘Jenny Wren,’ and ‘Night Journey,’ are equally bizarre mixes of rite and ceremonial if somewhat lighter in tone.
That she’s an academic – University of Sheffield – should come as no surprise as each song is researched, explained and backed up by precise notes which you need particularly with ‘ Sir Launfal,’ the number which I’m convinced will come to be seen as the centre piece of the album. Given a flow and structure by reduction from a 6,000 word Middle English ballad to something far more manageable for both artist and listener, this is really a tale of worth and honesty over the false allure of wealth and riches, even if it does take one of the faerie to make sense of it all.

There are all sorts of ancillary activities and ideas on her website to help you understand her reasons and sources whilst you spin the disc in your CD player. It’s important to Fay that you try to catch her motivation and drift as she says herself in the press quotes, “perhaps in these strange times it’s particularly important to understand how stories can help us make sense of the world around us, both the world we can see and also those darker, less tangible things. Maybe hearing how they’ve become important to me, can help you in this time of insecurity, to find some sense and beauty.”