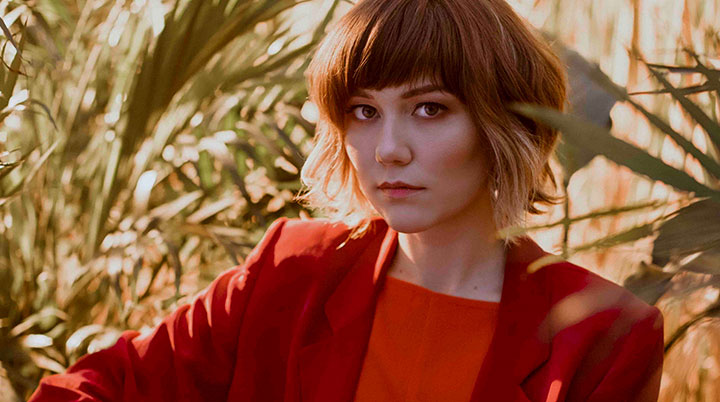 Arriving home from a recent solo Molly Tuttle performance, I was eager to slip on her CD, ‘When You’re Ready’, to relive the experience. The audience had particularly been blown away by the fast and furious, bluegrass style picking that has led her to win the ‘Instrumentalist of the Year’ award at the 2018 Americana Music Awards. However, the CD reveals that there’s even more to Molly Tuttle than her solo show had suggested.

It’s no surprise that the audience were primed to appreciate her bluegrass approach as the seven tracks of her previous release, ‘Rise’, fall into this kind of territory. Give or take the occasional ballad. However, ‘When You’re Ready’ finds her in a more expansive mood taking on a variety of approaches as she bends to the songs and band format.

Of course, it needs great songs whatever approach you take and this album starts with a belter, ‘Million Miles’. Co-written with Steve Poltz and originally started by him with Jewel, it ends up here with Sierra Hull on mandolin and Jason Isbell on backing vocals. The involvement of these high calibre musicians gives you a sense of how highly rated Molly Tuttle is amongst her peers. It’s a song with a dreamy, string drenched chorus that will get plenty of attention.

That’s not to say her blistering bluegrass playing has disappeared as we hear on ‘Take The Journey’ which also gathers in some electric guitar to help give the track its electrifying pace. It’s a band feel that returns with the excellent ‘Light Came In (Power Went Out)’ which brings back memories of 1980’s power pop. ‘Messed With My Mind’ comes with a blues phrasing to the sound which might surprise some of those drawn into her bluegrass style. It’s eerie middle section with some soaring guitar may come as even more of a surprise. Then, with ‘Sleepwalking’, she returns with a ballad that helps emphasise the strength and versatility of her vocal.

So, great songs, great playing but with a variety of approaches on show that may surprise in their shift from acoustic to more electric arrangements. Molly Tuttle is full of surprises on ‘When You’re Ready’ but the quality remains high whichever way you look at it and it’s always good to see a talented artist developing.