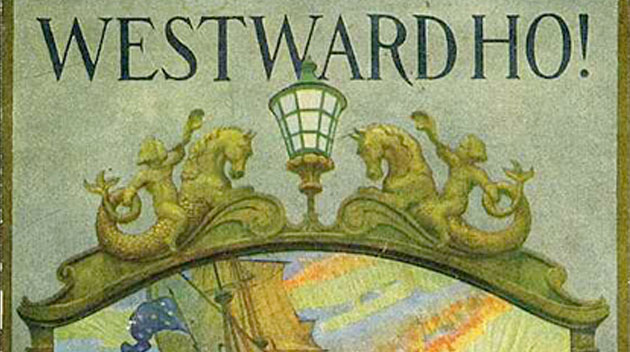 The only place name in the British Isles with an exclamation mark. (There’s something for pub quiz geeks to squirrel away).

As a Cornishman living in Devon, inextricably linked to the west country, these two words for me conjure up powerful images and memories.

It is a north Devon seaside resort but was originally the title of Charles Kingsley’s 1855 novel about an Elizabethan seaman who sailed with Francis Drake and other privateers to the Caribbean to cross swords with the Spanish.

As a musician, it sums up for me the ‘sense of place’ enshrined in much of the music I listen to or perform.

It began when I was a schoolboy in the fishing port of Newlyn. In 1956, when I was just nine years old, 10 miles up the road in the tin mining village of Pendeen, folklorist Peter Kennedy was collecting a children’s song “The Old Grey Duck” which my grandparents’ generation used as a lullaby. I am still singing it more than 50 years later, all the while thinking of those wind-lashed moors of West Penwith where I grew up.

In my teens my musical education, which was more a process of osmosis, was enhanced in Penzance where male voice choirs popped into the pub after their weekly practice. Freed from the restrictions of the more conventional hymns, gospel or patriotic songs, they’d belt out lusty choruses of ‘Going up Camborne Hill Going Down’ (about Trevithick’s steam engine), ‘Way Down to Lamorna’ or ‘Under the Bamboo Tree’. When I moved to London and frequented the bustling but soulless bars of the city, I longed for those grey-granite pubs, rammed with Cornish accents, thick as clotted cream, ringing’ round the rafters.

Musically there was a strong ‘sense of place’ in Mousehole, (pronounced “Mowzull), the next fishing port to mine – where every December 23 they celebrate ‘Tom Bawcock’s Eve’ and bake ‘Star Gazy Pie’ with fish heads sticking out of the crust. It commemorates local fishermen who, after a string of storms many years ago, put to sea and brought back a bumper catch to feed the starving villagers. Legend has it that there were seven different kinds of fish in the pie. I can smell the steaming, fishy dish, hear the crunch of waves on the pier outside, and the echo of locals singing the unique Tom Bawcock song as I write this, even though I’m sitting in a Dartmoor cottage!

A few miles east of Penzance is Helston where women dress in ball gowns and men don dress coats and top hats to dance in and out of the houses on May 8. At 7am the big bass drum strikes up a plodding beat and the town silver band spends the next seven or eight hours oompa-pa’ing the familiar Floral or Furry Dance tune. The word ‘furry’ is believed to come from an old Celtic word, feur, meaning festivity. For those of us who have been there on the day, the other lingering memory is the pungent scent of Lily of the Valley, which everyone uses to adorn their clothes or homes.

Another, more raucous feature of the day is the Hal-an-Tow ceremony in the early morning where freshly-cut branches of sycamore are wielded as singers lustily announce ‘For summer is a ‘coming… and winter’s gone away..O’.

For musicians and lovers of folk tradition the ultimate ‘sense of place’ in Cornwall must be in the port of Padstow on May Day when proud locals perform their utterly primitive, pagan-like “Obby Oss” ritual. Driven on by massed accordion bands and drums, locals and onlookers throng the narrow streets in a parade which is more of a rugby-scrum and the atmosphere is visceral. Padstonians are known to make pilgrimages from Australia and the Americas for this ancient rite and will mope in tears in far away places if they can’t be back home for ‘Obby Oss.

A short boat ride up the north Cornwall coast is the quaintest of villages, Port Isaac, (made famous by TV’s Doc Martin series) and it’s here I’m occasionally privileged to play and sing with the Fishermen’s Friends shanty group. They’ve met on The Platt, the slipway that runs down into their little hideaway harbour, for many years, raising money for the local lifeboat with their impromptu sing-songs, although these days up to 1,000 people attend. The point here is that they did this long before they were famous, signed to a major record label, had a top ten hit album or played the main stage at Glastonbury. Despite their commercial success, there’s nothing cynical or contrived about what these old school friends do. The hordes of holidaymakers who squeeze into this unbelievably pretty place share in this music and the palpable sense of place these gatherings convey.

‘Sense of place’ is defined by sociologists and psychologists as a feeling, perception or emotion felt by people in relation to characteristics that make a place special or unique. And it is easier to experience in these remote, rugged places which have a strong identity and character that is deeply felt by local inhabitants and shared by visitors.

Landscape has much to do with forming and informing us. In my native west Cornwall, and here on Dartmoor where I live, the rocky coastline, high moors and wood-lined creeks and estuaries help define that sense of place. Not to mention the industrial legacy, such as the evocative Cornish mine engine stacks, which stand like tombstones all over the county.

But it is people who are the key to a sense of place. When I wrote a protest song, ‘Tie’ Em Up’ – about fishing quotas and limited days at sea – I was thinking of the fishermen I have met in “Brixham, Plymouth, Padstow, Looe , Mevagissey…..Newlyn too.” My Dartmoor neighbours include hardy hill farmers, who take their livestock to market every week in Tavistock and where fatted birds are still driven into the annual Tavistock Goosey Fair. Go to the other side of the moor and the locals- and visitors – are equally enthusiastic about their Widdecombe Fair, ‘Old Uncle Tom Cobley ‘an all.’

As I write, I have just returned from an idyllic camping weekend on The Lizard, the most south – westerly point in the British Isles , and it was an unexpected pleasure to find that the Cadgwith Singers were performing in the pub one night. Like the Port Isaac lads, their members include lifeboat crew and coastguards, so no question there about their Cornishness or right to sing their songs. It was a unique experience to hear them sing that mysterious folk song, the Cadgwith Anthem, and while I still can’t quite fathom the meaning of the words, perhaps that’s the point. It is an enigma in a song – to make us think of who we are and why we are here. And while they were about it, they finished the evening with a rousing rendition of ‘Trelawney’, the Cornish national anthem for which the crowded pub stood proudly to attention and raised their glasses high.

As if to underline that traditions – certainly in these far-flung places – are not about to fade away, the next night was Midsummer’s Eve, which the Cornish annually celebrate as the feast of St John the Baptist, with blazing bonfires on hillsides all over the county. The Lizard schoolchildren duly turned up in Cornish colours and waving the black and white flag of St Piran led us in a ceilidh, and a grand procession to a nearby farmer’s field where we munched on mouth-watering pasties around the spitting fire. These traditions will never die while those children have such memories to cherish.

Closer to my home, I can’t drive across north Dartmoor without thinking of magical nights in the pub at South Zeal where the Bazeley family (relations of the late traditional melodeon player, Bob Cann) meet regularly to pass their tunes and style of playing onto the youngsters. It’s that same inimitable ‘sense of place’ I have experienced in the Celtic Fringe of the west of Ireland, Orkney and Brittany.

It is a soulful and spiritual presence and a vital part of what makes us human and civilised.