The Waters The Wild – Ninebarrow 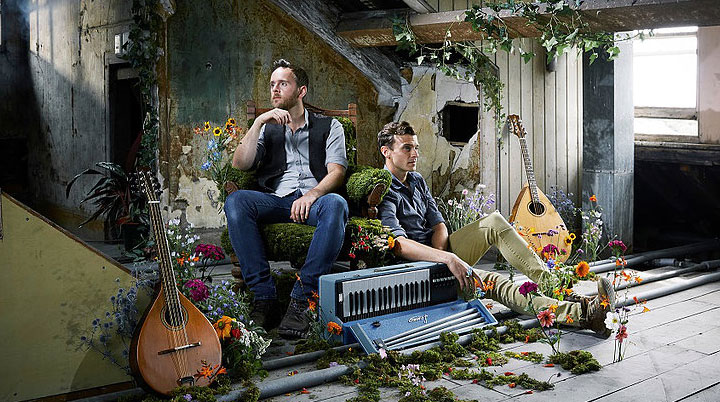 Ninebarrow is the Dorset based duo of Jon Whitley and Jay Labouchardiere, and The Waters and the Wild is their third album. It shares many things in common with their previous work, not least an impressive excellence in writing, performing, musicianship, recording and creativity – These guys don’t seem to have ever had any rough edges, nor do they seem to accept anything but perfection in their work. In fact they candidly admit that they are a ‘pain in the arse to work with’ when they thank producer Mark Tucker in the sleeve credits.

The album comes with a gorgeous little songbook (illustrated beautifully by Jon’s sister Sarah Whitley), which contains lyrics alongside origin stories for each song. This is where you really get to understand the Ninebarrow story, which to a large degree is the story of 21st Century English folk music (dare I say ‘Millennial Folk’? Better not…). They turn their gaze to the natural world, not as a part and parcel of it as the folk singers of old were were, but from where we stand now, aware that we are complicit in changing the world around us.

‘Overthrown‘ imagines a stretch of the Dorset Ridgeway in the future ‘when humans are no longer masters of this landscape’. The human scars on the landscape are ‘overthrown by grass and flower’ in this delightful song, gently powerful as it showcases their incredible harmonies.

The Waters The Wild is also an ode to the beauty of Dorset and the sense of home, or ‘Hwome‘ where they take a poem by the Dorset poet William Barnes written in the Dorset dialect and set it to music.

Can an album be an antidote to the madness of the modern world? I think it probably can, especially when it is made with as much love and reverence as this.