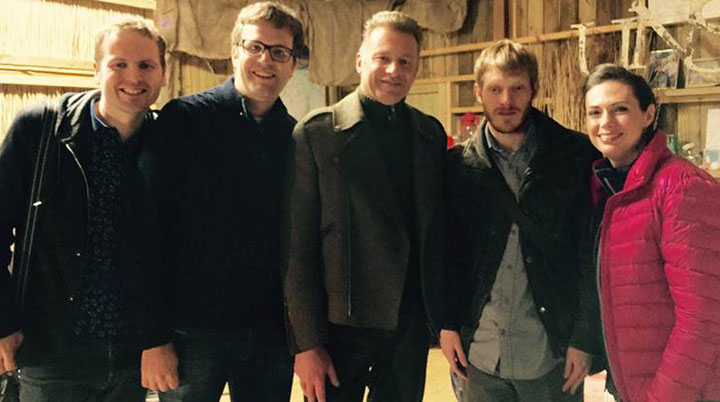 Triumphant trio The Young ‘uns made a guest appearance on BBC-tv’s Springwatch popular spin-off show, Springwatch Unsprung, on Friday June 3rd. Teesside’s Sean Cooney, Michael Hughes and David Eagle, together one of folk’s hottest properties, made it two in a row last month when they scooped the 2016 BBC Radio 2 Folk Awards coveted “Best Group” title for the second year running at the Royal Albert Hall.

Patrons of the UK’s most easterly music festival FolkEast, which takes place at the Elizabethan Glemham Hall every August, the band forged further links with Suffolk when they performed at RSPB Minsmere on Springwatch.

They talked with presenter Chris Packham in front of a studio audience about how nature has inspired their music. Earlier this week they were at Minsmere for an alfresco recording of a new Sean Cooney-penned song entitled Lapwings. Inspired by a First World War diary entry by Private Thomas Williams of the 18th King’s Regiment (Liverpool) it is introduced by the BBC’s Frank Gardner .

Watch it now on the BBC iPlayer HERE

The Young’ uns, whose successful 2016 has also included their first tour of Australia, are heading out for a Canadian tour in July.

Like Chris Packham, the North-East trio look on Suffolk as something of a second home. Building on a growing collaboration they will appear on the main stage of FolkEast this August with Aldeburgh Young Musicians, performing music from Suffolk folk singers including Bob Hart, who released the seminal Songs from Suffolk album in the Seventies.

The three friends discovered folk music at their local pub in their native Stockton-on-Tees and have been honing their craft for over a decade.They have proved themselves an engaging, unique proposition – writing and performing a capella or subtly accompanied songs that tell it how it is alongside traditional songs from their native North-East and further afield.