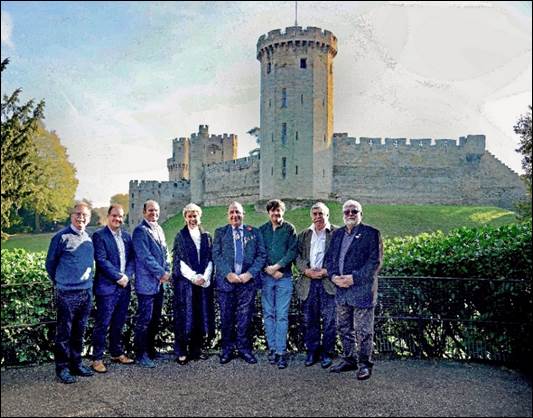 Warwick Folk Festival, which celebrates its 40th year in 2019, has announced one of the biggest names in folk music as its new Patron – multi-instrumental wizard Will Pound.

Pound, born in the county at Rugby, brought up in Whitnash and now living in Kenilworth, is best known as a world-class harmonica player but is also a fine melodeon exponent.

Festival director Dick Dixon says:  “Warwickshire lad Will is one of the finest traditional musicians of his generation. He has worked with the best, been nominated and won many coveted awards and is known and admired across the globe.

“He was nurtured right here in the Warwickshire folk scene and continues to contribute fully to the local music and Morris dance circuit. As the county’s leading folk event, Warwick Folk Festival is delighted and proud that Will has agreed to be our Patron.”

Pound has been nominated for the coveted Musician of the Year title at BBC Radio 2 Folk Awards three times, in 2016, 2014 and 2013. He was named Best Newcomer by Songlines Magazine in 2014 and won FATEA Magazine’s Musician of the Year title in both 2014 and 2015. He has also appeared on BBC Breakfast TV and his music has been played on Radios 2, 3 and 6 and the BBC World Service. Will also played harmonica on the Hillsborough charity single, joining a line-up of pop and football stars, on He Ain’t Heavy, He’s My Brother which became the Christmas No 1 in 2012.

Brought up in the Morris tradition he is a member of Warwickshire’s Chinewrde Morris and Earlsdon Morris. He had long held an ambition to record an album celebrating the music of Morris and folk dance and last May that came to fruition when he unveiled the CD Through the Seasons – A Year in Morris and Folk Dance, with a companion live show touring the UK, supported by Arts Council England.

Says Will: “I’ve been involved with Morris and folk dance since I was born, as my parents were already part of Chinewrde Morris. So I’ve grown up in a vibrant and fun community of dance and music in Warwickshire.

“I’m very honoured to have been asked to become Patron of Warwick folk festival. I’ve been involved at the festival playing with many acts and with the Morris and I haven’t missed a Warwick in my lifetime! I really hope everyone enjoys the 2019 festival and I look forward to many more years to come at this brilliant festival.”

Will is set to tour the Through the Seasons show again next spring with musical collaborators Benji Kirkpatrick and Ross Grant and storyteller Debs Newbold.He will also be touring once more with accordion maestro Eddy Jay but from July 25-28, 2019 there is only one place he will be – back in his home county as he takes up his patronship of Warwick Folk Festival.

Since its humble beginnings in 1979, the annual Warwick Folk Festival has grown into one of the most highly regarded folk events on the UK festival calendar attracting fans from all over Britain and as far afield as the USA and Australia.The festival takes place at the Warwick School campus and as well as a wealth of music features comedy, crafts, dance and workshops.