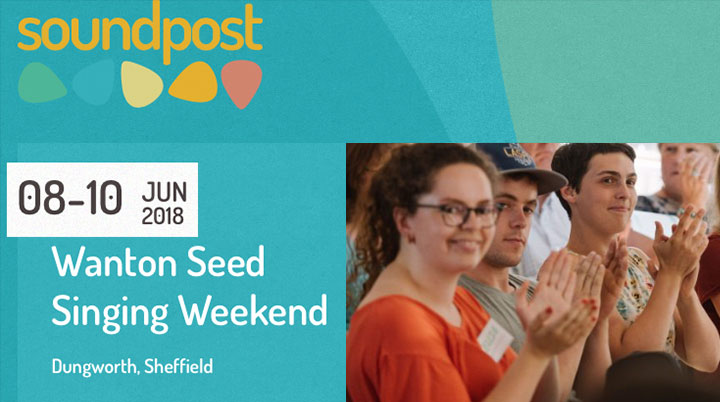 Do you want to sing your heart out in the beautiful Yorkshire countryside? Do you yearn to delve into some classic folk repertoire? Do you want to hone (or even find!) your vocal skills with the likes of Jackie Oates, Paul Sartin and the Askew Sisters? There are just a few places left on the weekend, so get your tickets quick!

Soundpost’s Wanton Seed Singing Weekend, which takes place in the Sheffield village of Dungworth (8-10 June 2018) is aimed at anyone from complete beginners to experienced singers. Says director (and singer/fiddle player) Bryony Griffith, “If you’ve never sung out before, it’s the perfect place to come and do it in a safe environment. If you’ve sung a lot, it’s a great way to learn new arrangements or new ways of singing or accompanying yourself. Our tutors all have a slightly different skill set and we have a good mixture of academic and performance skills, as well as different instruments.” There are even bursaries available if you’re between 18 and 30.

The weekend, which celebrates the songs brought together by the reissue of the classic folk song books Marrowbones and The Wanton Seed and the brand new omnibus edition, Southern Harvest, is a mix of workshops, talks and performances as well as one-to-ones with the artists and the workshops have enticing titles such as “The wanton women – exploring songs of women who did”, “Recycling song” and “weird and wonderful harmonies”.

In fact, says Griffith, “You could even come and not sing a note but still enjoy learning about the repertoire. We aim to make it really inclusive and everyone who comes to these weekends goes home having made friends – some have even formed singing groups.”