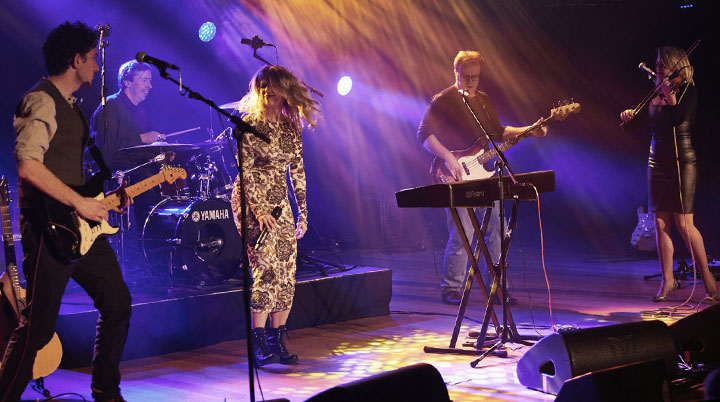 Walls and Ceilings is the first recorded music from the new line-up of Fred’s House; the band have been joined by Prue Ward (ex The Willows) on violin and vocals.

Fred’s House have carved out a joyful niche for themselves playing upbeat folk-rock, making them really popular on the live circuit and mainstays of the Cambridge music scene. They have supported great artists and even toured in China. Listening to them in the middle of the Covid-19 worldwide shutdown makes one
yearn for live music, a gig to go to would be a dream come true at the moment.

Right, so I mentioned the ‘folk-rock’ words in the last paragraph. This term has a different meaning for every band that invokes it, so I’d better double down on what it means in this case. We’re talking harmonies dripping with honey, rhythms that echo the waves breaking on a golden Californian beach, melodies that make you feel warm and happy and glad to be in that precise moment. All of which are held up by a solid sense of the here-and-now, they’re not being retro or vintage in any fusty folky-rocky sense.

They now seem unafraid of making their music totally their own. Vikki Gavin has always had one of those voices that draws people closer, here she draws deep on a well of soulful stylings, both in her vocals and writing. The band itself gels so well in this new expanded line-up, as you would expect from a group who have proven themselves such a polished live act. Significantly, they have resisted the pitfall that hampers a lot of bands that are perceived as primarily a live act; that of thinking of themselves as a just a live act. Once you do that it affects everything you write, if you can stay honest to the songs you want to write, you produce albums of variety and depth rather than trying to make every song a live crowd pleaser.

Fred’s House have got that just right, they write songs that please the heart and soul. But would you believe it, it just so happens that their songs are natural crowd pleasers precisely because of that.