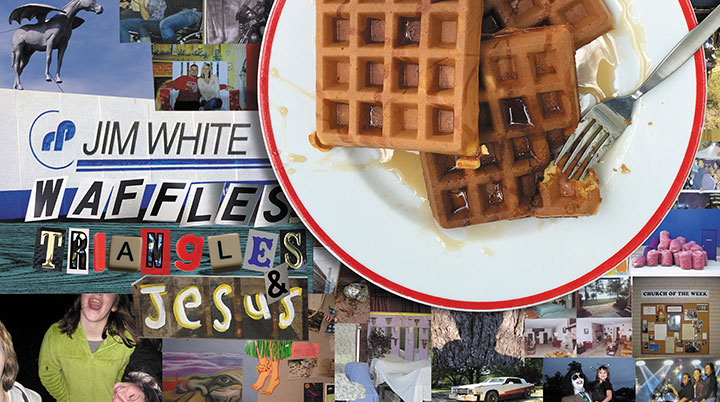 Recently, Jim White described his music making as creating a musical bonsai tree in reverse by throwing the leaves he collects into the air to create an interesting form before building the supporting trunk. Without even hearing the music, that pretty much tells you that we’re dealing with one very creative person here. For me, listening to a new Jim White record is like revisiting your favourite meals. Whilst there are differences, the similarities tell you that you’re going to enjoy it. Indeed, with ‘Waffles, Triangles and Jesus’, the head cook has surpassed himself with quite a few of the dishes on offer.

Anyway, enough of analogies, on to the music. As the title of the record suggests, Jim is back in familiar territory following a number of records best summarised as projects. Those projects including various roles as producer, scoring music for a Sam Shepard play, award winning short story writing and a bluegrass collaboration with The Packway Handle Band of Athens. His home town base in Georgia has certainty proved to be a fertile soil to grow those musical bonsai trees. Indeed, the record draws in a number of local collaborators including the bluegrass of Hog-eyed Man though, in truth, it’s difficult to pigeonhole the musical feel of this record – always a good thing in my view

The familiar territory that he returns to includes religion, good and evil, slices of fun and, as he states on his website, crackpot philosophy. ‘Prisoner’s Dilemma’ reflects a number of those themes taking its name from a decision between co-operating and collusion in game theory but, here, White uses it to pose a religious dilemma. As he reflects on prison cells, he looks at murderers and their like with the ‘rotten tooth of their wasted youth’. Carried along by a liberal slice of funk, he asks if they might think that was ‘what the good Lord intended us to be’ as we’ve all been put here for a reason.

As is often his wont, he smiles on sadness. On ‘Reason To Cry’, a song that ebbs and flows between a jaunty bluegrass and a mournful gentleness as he reminds us that tears don’t need to be justified. Similarly, ‘Sweet Bird of Mystery’ looks at life and loss with some dramatic strings across a simple piano piece as it gently says farewell at the end of the album.

It’s not all dark and mysterious. ‘Silver Threads’ is a pure slice of pop with a joyful brass driven rhythm about how we mend after a personal loss. The tongue in cheek nature of ‘Playing Guitars’ is one that pokes fun at the excess of wannabe musicians ‘from skidrow up to the walk of stars’ that seem to be seeking a way in life. Naturally, the track has more than its own fair share of twang and looks in the mirror at the end to find White looking back.

As usual, Jim White ploughs his own furrow with music that draws from a wide range of influence. With ‘Waffles, Triangles and Jesus’, he seems to have found a good home amongst local musicians who’ve added extra polish to the shine of his chrome. Long may his Cadillac keep rolling along.