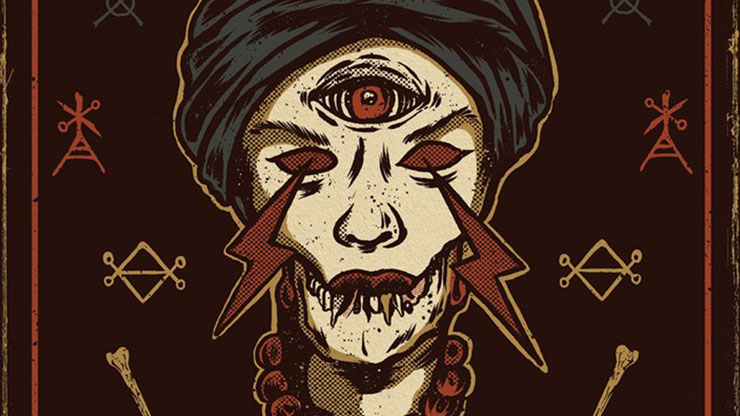 Despite all the voodoo, hoodoo and heavy eyeliner, Jo Carley and her associates have come through a couple albums of heavy magic and spooked blues’n’rhythm to some acclaim. This, their third, is any way you care to look at it, most likely their best yet, although it was recorded in trying, Covid influenced circumstances.

The fact that the trio are family and best chum, must add something to the mix because ‘Voodoo Bones,’ is obviously the product of three musicians who know how each other operate and even think. Mixed at the appropriately named Gizzard studios after home recording in what they insist is a shack, the resultant album  comes in suitably dark, skeletal packaging.

From the off we’re thrown into a concoction of spells and magical dealings under the streets somewhere in an unlit part Soho. Elsewhere with necromancy and ghostly lyrics the old timey, blues groove drives us to meet witch doctors, drowned sailors and er…zombies (quite a few of them.) Sounding like they’ve just emerged from a New Orlean’s grave yard at midnight tracks like ‘The Bone Readers,’ and best of all the mandolin stomp of single ‘Under Your Spell,’ puts their rootsy circus sounds over with convincing skill and a huge dose of humour.

Creepy and full of mischief, don’t listen with the lights turned off or you just might jump out of your skin, which would explain all the skeletons around! Voodoo just for you then.