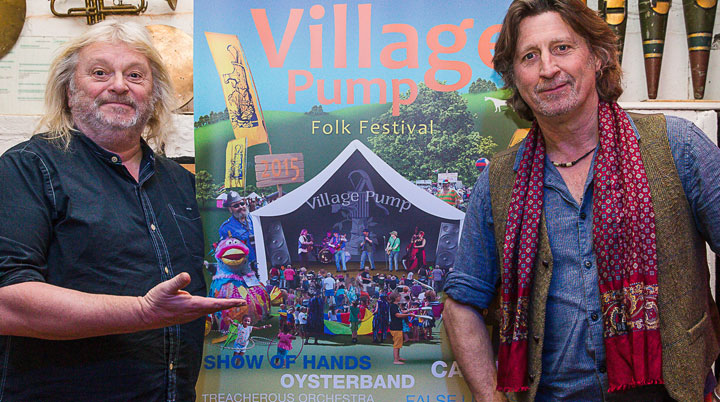 In darkest Wiltshire, several trillion light years ago (1974 to be precise), an interesting bunch of characters who congregated at the Village Pump Folk Club hit upon the mad idea of organising a festival. Originally intended to be held at a barn in Bradford-on-Avon, the council pulled the rug at the last minute and that might have been that. But they shifted it to their local, The Lamb in Trowbridge, stuck a big tent in the garden and put on a few other events at Trowbridge Civic Hall. Various luminaries of the day, such as Steve Ashley, Gryphon, Decameron, Allan Taylor, Fred Wedlock, Aj Webber, Alex Atterson, Crowdy Crawn and The Watersons were lured along to strut their stuff.

Foolishly, though, they invited some herbert from Melody Maker magazine to come along and write about it. Predictably enough, he came along, probably drank too much and went home to give it up a bit of a kicking, saying they’d got it all wrong but – and here’s the patronising bit – praised their effort and challenged them to do it all again in the hope that they’d get it right the following year.

They did, too, apparently and four decades later they decide enough time time has elapsed for the herbert in question to be summoned west once more to view their progress.

And so it is that I find myself back in Wiltshire under the gaze of the white horse that looms large on the hills surrounding the inviting country park at Westbury to taste once more the delights of the Village Pump Festival.

Several oceans of water have gushed under a myriad of bridges since that initial plunge, of course, and for reasons of finance, changing personnel, bereavements and shifting musical direction (Boney M headlining in 2010 as a late replacement for Kid Creole & The Coconuts anyone?!), its course hasn’t always been smooth.

But now in its fourth year at the White Horse Country Park under the direction of one of the those original 1970s cavaliers John Alderslade – an avuncular figure lavishly dispatching anecdotes and bonhomie in fetching blazer and boater – the atmosphere is, er, pumping.

Back in the day, folk festivals focused on contemporary rather than traditional music were rarefied and, apart from Cambridge and one or two other short-lived and ill-thought attempts to create instant Woodstocks, pretty much non-existent. So as a festival with its heart in the right place, generally doing the right things for the right reasons, the Village Pump has long established its honorary place as a footnote in British folk history. But now, in this gorgeous setting, four stages (and a hall), easy access, relaxed atmosphere, a village shop, dining in an open-top bus, plenty of room and Phil Beer beer to sup, it is a feel-good model of a genuine community event…

The soggy early portents aren’t good and you view the array of tents alongside the site with a mixture of sympathy and relief that you’re not in one of them. But drainage is excellent, the weather quickly perks up and the music swiftly obliterates all negativity.

There’s Jez Lowe in the unlikely – but hugely uplifting – company of Maggie Holland, Rod Clements, Ian Thompson and Chris Parkinson performing a wondrous sort of Geordie Americana hybrid in the persona of The Broonzies. Splendid stuff.

And the Friday night gloom is further lifted by a surprisingly emotional and accomplished Barbara Dickson set, followed by a sparkling and somewhat off-the-wall performance by the excellent Coco & The Butterfields, who cut their teeth busking on the streets of Canterbury. Original oddball songs; unclassifiable music; goofy presentation; audience inter-action; unlimited verve, versatility and vitality; plentiful humour; joyous rhythms; interesting haircuts; Tenpole Tudoresque anthems like Warriors; a Nina Simone song; dancey bits; brassy bits; quality vocals from a singer from a singer called Dulcima; bright colours; and a human beat box. What more could a festival want? After this performance the Village was well and truly pumped.

Saturday dawns gloriously sunny and all is well with the world – or Trowbridge at least – with some lovely sets. Maggie Holland singing A Place Called England, Rod Clements rolling back the Lindisfarne years with Meet Me On The Corner and Jim Moray and Sam Carter hauling the ancient beast of folk-rock from the grave dug for it when this festival was a mere nipper, blowing away the mothballs and reviving it with love and vigour in the band False Lights. I’ve never seen Jim Moray smile as much on stage. Or anywhere else.

Disappointingly, Roving Crows no longer feature brass, but Pat O’Neill remains an imposing front man and powerful songwriter and they provide a buoyant set. Good to hear Roots impressively re-worked in understated form as part of a characteristically rabble-rousing Show Of Hands set. Whatever else, know exactly how to capture the hearts, heads and feet of a festival audience.

Exciting, too, to hear Edward II unveiling their brand new ‘Manchester’s Improving Daily’ project based around Manchester songs from the industrial revolution. Given that the band’s fascinating pioneering Anglo-Caribbean work has scarcely been explored by anyone else since they first starting doing it in the last century, their radical, reggae-infused re-workings of everything from Victoria Bridge On A Saturday Night and the Kersal Moor Demo song to MacColl’s Dirty Old Town seem doubly important. Great idea, too, to contextualise it beforehand with some unaccompanied songs from young Lancashire ballad singer Jennifer Reid.

Cue the Treacherous Orchestra for the big, climactic finale and, with guaranteed festival favourites Spooky Men’s Chorale, Keston Cobblers Club, Oysterband and Mad Dog McCrea set up for a storming Sunday in front of the illuminated white horse, the Village Pump experience is complete.