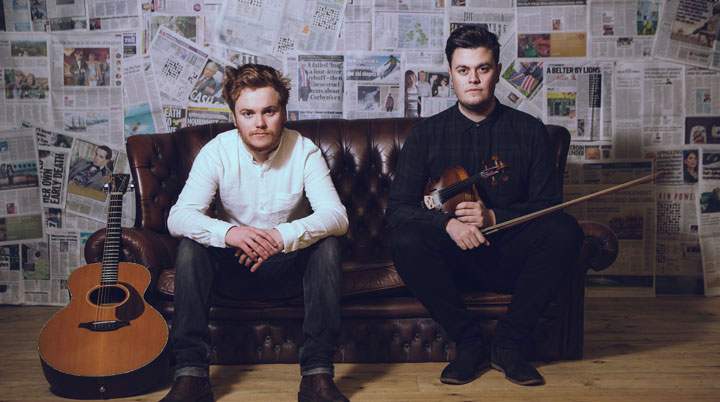 To say these guys showed early promise would be an understatement of huge proportions. They started on the moonlit path of folk music whilst still at school, sounding like they somehow had decades of experiences stored up to bring forth in music and song. Critical and popular acclaim has followed everything they do and Utopia And Wasteland is another jewel in their crown.

This fourth album benefits from their experiences recording and performing solo and with other outfits (Russell in The transports and Algar with Sam Kelly). Now they sound even more mature than ever, the proof of which is that the majority are their own compositions, just two trad tracks on the album.

The songwriting is masterfully inciteful – these boys see what is going on in the world around them and realise that much of it is plain wrong or riven through with injustice. The wealth gap and the majority on the ever growing have-not side that was thrown into sharp relief with the Grenfell disaster on We Are Leaving. The dubious political decisions that are pushing through the HS2 railway are skewered on album opener Line Two. On 1908 Russell pulls lyrics from a broadside printed one hundred years ago and asks what kind of society we inhabit now. It speaks of snakes in power and calls for a rise to action against this ruling faction, a plea for honest government that should be spray painted on every council hall and government building.

This is another album produced by Mark Tucker, who also contributes voice, bass and percussion. His studio,The Green Room, is well named as it nestles at the top of a valley near the Devon and Cornwall borders. Mark has become the go-to producer for a swathe of folk and roots artists. Having seen his gentle creativity at work I can attest to his skills, his whole studio/house and garden has a naturally positive creative vibe that wraps up any artists recording there in a bubble of security whilst he wrings every creative drop from them through his recording desk.

So it’s another stunning album from this duo, I’d say at the height of their creative powers, but they seem to have been surfing that wave since they were kids. It’s a wave that shows no sign of running out of power anytime soon.