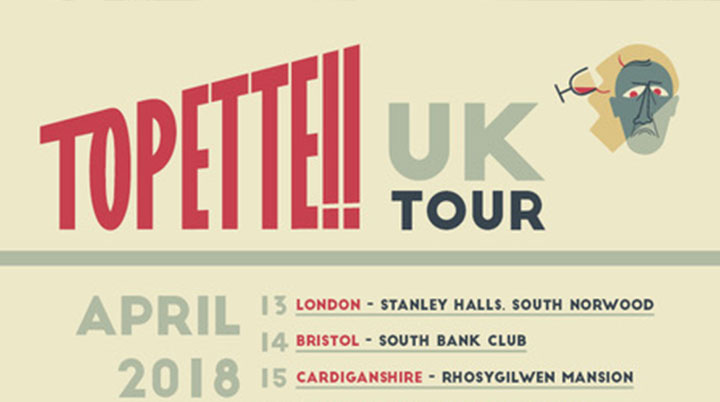 Some bands are meant to be.  The Anglo-French acoustic dance band Topette!! is one such…a collective of uninhibited musical adventurers playing self-penned and traditional music from anywhere with a winning mix of bonhomie and grit.

Born out of friendship, the five-piece play naturally social music – for filling dancefloors, for listening, for drinking with friends – but don’t expect it to merge into the background. This is raunchy, up-all-night, joyously jugular grabbing dance music.

Driven by the rhythmic boiler-room of Stradling’s gnarly bass, Buisse’s intuitive bodhrán playing and Cutting’s warm bottom end, the melodies burst out of the seams of this bedrock. With great big anthemic walls of sound, the vibe is ‘Party!’: Cartonnet’s glowing French piping and visceral tenor banjo, Delarre’s bright, bushy-tailed fiddle lines and Cutting’s dynamic accordion style. They are, quite literally, having a ball !

Their  album C’est le Pompon…  a French expression similar to “that takes the biscuit !” – features an eclectic selection of material. Beautifully recorded at Giant Wafer Studios in Wales, by Topette’s producer and live engineer, Joe Garcia, it opens with ‘Venture’, a rollicking new tune by the band’s accordion maestro, and three times BBC Folk Awards musician of the year, Andy Cutting. French dance tunes abound, including the traditional Bourée Morvandelle and, extraordinary piper, Julien Cartonnet’s own La Lustrée, but then the album careers off via a gloriously plunky version of Ola Bäckström’s Meatballs, Whiskey And Beer, a traditional Gnawa tune Hamouda and, underpinned by some seriously groovy bass, the ecstatic swirling tune–set Sunshine / Scottish Urbaine, penned by the band’s old friend, and hurdy-gurdy-guru, Gregory Jolivet.

This band are tearing up dance floors across Europe, as well as pleasing the ears of festival concert-goers, with their varied and ever-expanding repertoire…

So …Join in the party! Topette!!