Twice As Nice & Half The Price – Heron. 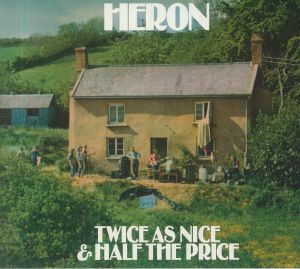 So there I was a couple of months back at a Record Fair in Crewe and really not a lot was standing out, when from the corner of my eye I thought I spied a copy of ‘Twice as Nice & Half The Price,’ across the room in a box at what looked like £29.00. Now for the uninitiated that’s very reasonable and if it was so priced, it’d found a new home pending condition inspection. Sure enough it was in fine fettle but that price, well it turned out to be £229.00. That’ll teach me to wear my glasses!!

But now, price scalpers take a running jump, because what’s arrived in the post courtesy of those decent souls at Talking Elephant but ‘Twice As Nice,’ in full gatefold with original running order. I’m well chuffed I can tell you. First class archaeology says I. Briefly the backstory runs… Heron were late 60s inspired acoustic musicians who curated a rural, folksy blend of inspirations which found favour with Pye offshoot label, Dawn. Their debut, produced by Gus Dudgeon, was actually recorded in a remote Devon cottage and took in sounds from just outside the back door to create a rustic ambience. The same methodology was carried on for ‘Twice As Nice,’ their second effort which was actually a double album, a luxury afforded them by an indulgent record company. It stands though as their best work.

Opening a run of decent tracks makes for a fine introduction to an overlooked group, ‘Madman,’ leaps and bounds about the place with puppy like glee on the back of a jaunty melody whilst ‘Take Me Back Home,’ has a hint of Incredible String Band though without their wilder flights of fancy. Heron do covers and an early run down of Bob Dylan’s ‘John Brown,’ makes a decent fist of it, equally Woody Guthrie’s ‘The Great Dust Storm,’ though a thousand miles from lush Devon pastures, woods and hedgerows does summon up images of hard times. Less advisable was ‘This Heart Of Mine,’ which comes over as rather flat and what might have seemed like a good idea really adds nothing to a satisfyingly varied album. Returning to their own efforts ‘My Turn To Cry,’ is a minor classic as is ‘Minstrel And A King.’ both of which show Heron’s homegrown unplugged creativity to great effect.

After this, a schism in membership saw one particular individual change direction completely and divert into the mainstream while those who remained took Heron into the realms of more occasional appearances though a steady stream of sessions and self releases right up to the 2000s saw them at least maintain some profile. In fact a decent compilation of that later material might be a good idea Talking Elephant.

Great to see their name back on the release sheets and in review sections, you should investigate and this is the perfect place to start. The Heron revival starts here.