TREES, From The Heartwood 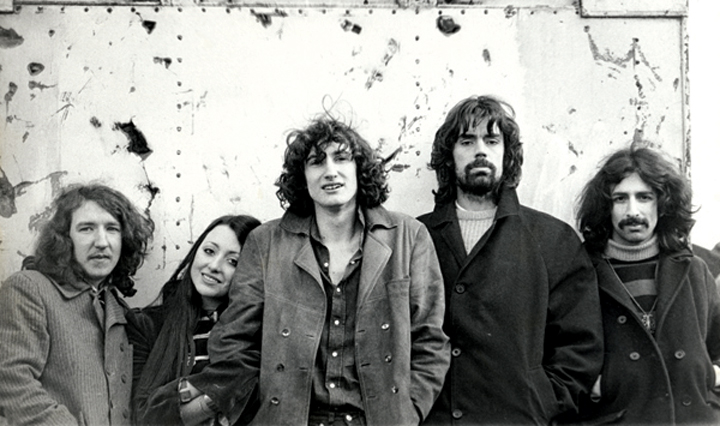 Trees- and we’re not talking forests or ornamental gardens here – were right in there at the dawn of folk rock, signed swiftly to CBS what set them apart from your Steelanglefotheringport slipstream was a repertoire which whilst based in folk material took things out to the limits by drenching their creations in psychedelic guitars and acid melodies, no electric fiddle dee dee, or monastic harmonics thank you. Original copies of their two official albums now go for silly scalper prices on Discogs, even reissues will set you back a hefty amount. Once the original band fractured in late 1971, various short stay members from Mr. Fox and other groups helped the name hobble to some kind of conclusion recording only radio sessions for posterity. These came out a few years back as Trees Live on an impossibly obscure Italian label, whilst old demo recordings were sneaked out as part of a folk rock obscurity series. Proper CD reissues emerged a decade ago with much explanatory detail and actually new recordings which lengthened the original albums considerably, sadly drummer Unwin Brown passed away around the same time. However the band’s cult status has never dimmed, in fact it’s only increased several fold.

It’s now over fifty years since Trees’ formation, and Earth Record’s have scheduled a new collection which brings together both albums adding shiny alternate mixes of key tracks along with a selection of radio sessions and demos, all sounding brighter and cleaner than ever before.

Trees first album, ‘The Garden of Jane Delawney’ (1970) snuggles nicely into contemporary nu-folkies’ idea of the genre, and shares some of the pastoral-whimsy that characterised The Incredible String Band or Donovan, offset by some stunning interpretations of traditional material and their own songs, which were somehow part of the tradition Trees had adapted. Readings of ‘Lady Margaret’, ‘Glasgerion’ and the old standard ‘She Moved Thro’ The Fair’, and the extended fade of the group’s own ‘Road’, presage the explosive instrumental duelling that would come to characterise the follow up album, ‘On The Shore’.

This special expansive collector’s edition celebrates the bands 50th anniversary. Out on November 13th you can pre-order from earthrecordlabel.com