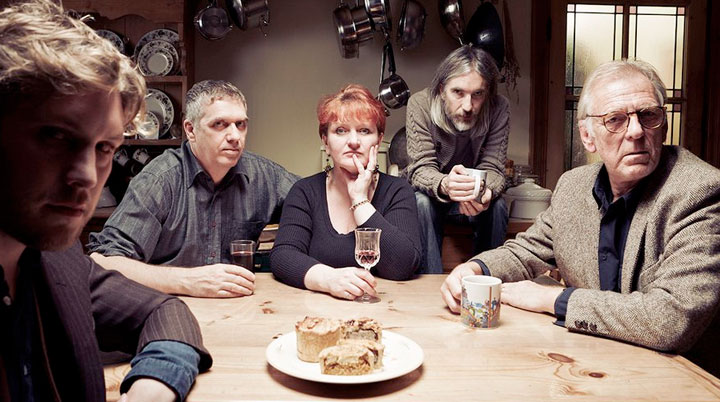 Let’s make no bones about it. This is an album that is about to blaze a fresh, new trail on the well-trodden path of British folk rock. Right from the opening track, a feisty, full-on note-for-note transcription of Ralph Vaughan Williams’ orchestral English Folk Song Suite, TradArrrr nails its colours firmly to the mast with imaginative, ambitious, sometimes startling, arrangements. Who ever thought to hear Mariachi horns and crunching lead guitar alongside Seventeen Come Sunday? Roll over, RVW!

This mighty crew – Gregg Cave, Guy Fletcher, Marion Fleetwood, Mark Stevens and PJ Wright – are a well seasoned bunch from a broad soundscape with a powerhouse of riffs and rhythms tight as a torque nut. On the aptly titled Mad Dog, Gregg Cave’s take on an Oliver Goldsmith poem, Steven’s drums, partnered by guest bassist Marcus Parkinson, lay down an addictive groove while PJ fires out incendiary solos and Fletcher spars with Fairport’’s Ric Sanders, for fiddle supremacy (honours even). There are more fireworks in Glenlogie, one of the noted Child ballads “in which a precocious teenager threatens a terminal sulk to get her own way”. Enter Pete Scrowther on vocals and from its gentle beginnings – acoustic guitar, fiddle and hi-hat  -they slowly ratchet up the tension. Marion Fleetwood creates a full string quartet over Stevens/Parkinson mighty beat, whilst Wright and Fletcher start to rock out whilst delivering a masterclass in tone and control.

It’s not all ‘foot hard down’ though. Wright and Stevens, joint producers of the album, also know the value of ‘less is more’. Marion Fleetwood’s breathtaking, near acappella performance of My Lagan Love with a gossamer clear accompaniment: e-bow by Stevens, sitar,12- string ‘ghost’ and majestic slide guitar solo by PJ is as dramatic a piece of music as you are likely to hear this side of the great divide.

Stevens and Wright are also followers of the Steely Dan approach to recording, bringing in appropriate guests to meet the needs of the material. Whitsun Dance Austin John Marshall’s song of the legacy of the Great War, requires a delicate touch and Chris Leslie’s fine voice rings true and clear, with his filigree mandolin lines sparkling amongst the full acoustic setting. Pete Scrowther returns to render a deliciously plaintive Derwentwater’s Farewell, telling the tale of the sad demise of James Radclyffe, beheaded for his part in the Jacobite rebellion. Alongside Fleetwood’s cello and viola, Mark Stevens plays unimpeachable, poignant brass on both.

A songwriter and voice to be reckoned with, Gregg Cave has a happy knack in adapting and re-working traditional ballads to great effect. Achingly sad, Adieu, whose tune’s beauty belies the sadness and circumstances of the lyrics, is a gripping performance by Cave, and the rest of the band step up to provide sublime backing vocals whilst Fletcher positively shimmers on violin. Simple Ploughboy is also a seafaring story of the cross-dressing variety so popular in English balladry. Once again it is Cave’s tune, but in an “AL Lloyd meets The Band” moment, virtuoso guitarist Jerry Donahue and Fairport’s legendary bassist Dave Pegg drop in to inspire a sound that is a musical toast to departed heroes. Wright and Donahue trade licks and tones while Pegg’s bass, as you would expect, is right on the money. No-one puts a foot out of place we get a glorious tour de force from a band made in heaven.

The Moulton Melodeon Mafia, aka Simon Care, Gareth Turner and Kristaps Fisher, push the music in a different direction as they lead the band, along with Ric Sanders and Dave Pegg once more, in two rousing English dance tunes, Princess Royal and Upton Stick Dance, the first quite stately and four square, the second more like a dash to the bar. A fine balance of finesse and energy by musicians steeped in the tradition, some tasty guitar and bass to rock it up, a soupçon of wit and a classy cornet introduction to Upton.

As far as cautionary tales go, the final track’s two songs, Nottamun Town and Pretty Polly, are suitably imbued with mystery and menace by way of Gothic backing vocals and an intense, relentless groove. Punching out some tasty acoustic guitar, Cave leads us through Nottamun sounding suitably perplexed. PJ picks up the tale with a gritty lead vocal on Pretty Polly over driving electric guitar, fiddle and Mariachi horns. As the story heads towards its diabolical conclusion Fleetwood picks up the woman’s side of the story, the band pushes the pace on, one more blistering PJ solo and well, trust me…. you can smell the brimstone from your chair.

Like I said, it’s ambitious, imaginative and startling. It sizzles from start to finish. Essential listening. Go get one.