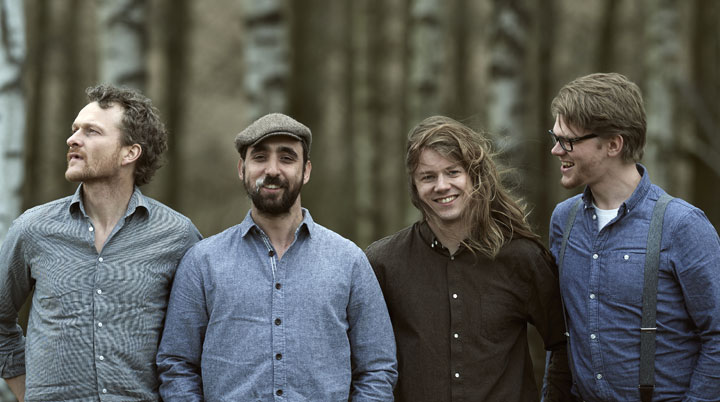 Danish band Basco invite music lovers to #showyourlove for European music and musicians this Valentine’s Day when they arrive in the UK for a short winter tour.

Gig goers are invited to use the hashtag #showyourlove before each gig to be rewarded with discounts on CDs and LPs and keep their eyes on the band’s Facebook page for giveaways.

The four-piece hope to entice music lovers to three gigs in England and Scotland. The dates are:

Basco are known for their frenetic live shows comprised of original material drawing on Scandinavian, English, Celtic and American traditions, and the tour is in support of their sixth album, Interesting Times.

The band describe Interesting Times as a ‘comment as well as an evocation of the ancient Chinese curse’ which goes some way to illustrate the varied repertoire that gig goers will experience at a live show.

‘I was born in Scotland and grew up in Australia’s Northern Territory,’ says fiddler, mandolinist and singer Hal-Parfitt-Murray.

‘I learned the Scots fiddle repertoire from the old, bearded gentlemen at folk festivals. Ale Carr [cittern] grew up in the Swedish forest to become one of the leading exponents of Southern Swedish music, while Andreas [violin/viola] and Anders [accordion, trombone] came out of the Danish polka and waltz tradition.

‘But on top of that, there’s string quartets, prog rock, minimalism, the Beatles – they’ve all planted seeds in our mind and you never know which tune they’ll choose to bloom in.’

In a career spanning 10 years, Basco know how to entertain and inspire audiences. A horn section for one album, a live recording with the Danish Radio Big Band on another, the band aren’t afraid of innovation – and standing still isn’t an option.

We all need a bit of love in our lives hey ??