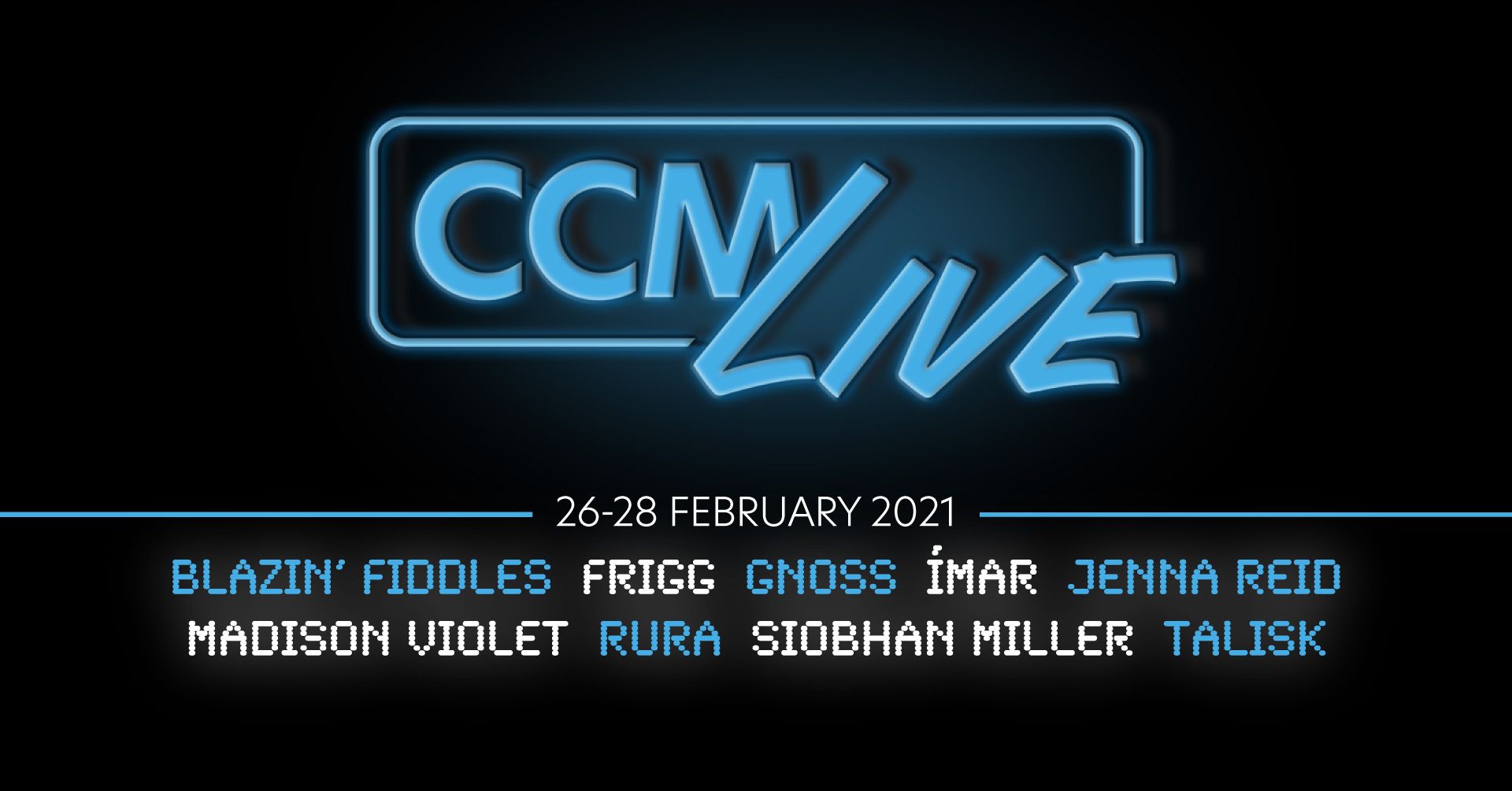 Some of the most renowned names in Scottish folk music will return to the stage this weekend, February 26-28, as part of CCM Live – a brand new, three-day event being broadcast live from Glasgow.

All seven Scottish acts, comprising 27 individual musicians, will appear live – and for many it will be their first fully live concerts in over a year, since the outbreak of the Covid-19 pandemic and cancellation of live events around the world.

Taking place against the continuing backdrop of social distancing and workplace restrictions, this weekend’s performances have been programmed against the strictest covid-19 safe working measures. The festival will broadcast from CaptureWorks in the east end of Glasgow – a tailor-made covid-safe production studio, established shortly after the first peak of the pandemic in 2020 to provide a space for live streamed performances of the highest quality, whilst adhering to all new working protocols and requirements. 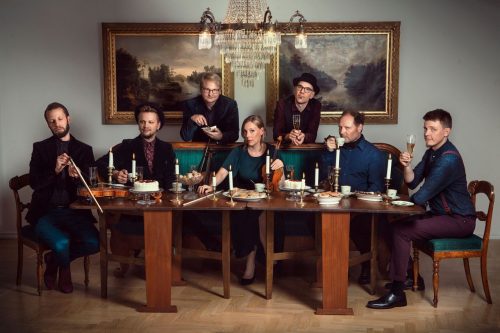 Frigg who will be appearing at the Festival this weekend.

In order to safely stage a multi-band festival bill, international footage is being used to allow extended live stage changeovers and sanitisation between artists, whilst every individual microphone, stand, cable and even item of furniture will each be used only once over the weekend, ensuring artists’ utmost safety as they return to live performance – albeit with a remote audience, and only essential technical staff in the studio.

The award-winning, Glasgow-based five-piece Ímar will open the festival on Friday night, followed by one of Canada’s most popular vocal duos, Madison Violet. Firm Scottish favourites Blazin’ Fiddles will round off the first night’s bill, whilst Shetland fiddler Jenna Reid will return to open Saturday night’s broadcast in a duo set with her sister, Bethany. They will hand over to the leading act of the Nordic fiddle scene, Frigg, before trailblazers Talisk close out the festival’s Saturday night.

Ahead of the release of their second album this spring, hotly-tipped young quartet Gnoss kick things off on Sunday evening, followed by a full band set from the multi award-winning Scottish singer-songwriter, Siobhan Miller – featuring special guests Louis Abbott (Admiral Fallow) and Kris Drever, alongside regular bandmates Euan Burton, Innes White and Megan Henderson. The festival will come to a close with a set from Rura, who celebrated their tenth anniversary in 2020 with the release of a critically acclaimed live album, recorded in front of a capacity crowd at Glasgow’s iconic Old Fruitmarket just over a year ago.

All artists will each perform a full one-hour set, and all three nights’ festival shows will be available for 48 hours’ catch-up viewing.

Over 700 weekend streaming passes have sold in advance of the festival, with audiences set to tune in from around the world, including the USA, Canada, Australia and Chile, as well as throughout Europe and the UK.  With such a renowned line-up, organisers hope that a flexible pricing model, as well as an on-demand viewing facility after each night’s live broadcast, will encourage audiences to discover new artists and music across the programme. Weekend passes are on sale at a recommended rate of £25, however there is also the option for patrons to pay what they can amidst the current climate.

CCM Live Director, Craig Corse – also one of Scotland’s leading folk-based booking agents – was inspired to create the festival to build upon successful standalone concert streams, seeking to recreate the energy and excitement of a live festival weekend for audiences, artists and crew. With support from Creative Scotland’s Sustaining Creative Development fund, CCM Live (the festival bearing the same name as his agency) will present nine of the artists in Craig’s roster in a unique and unprecedented live event.

Craig said: “I’m really excited to be bringing this weekend’s festival together, with a brilliant team of artists and engineers bringing the shows to life in living rooms around the world! Even though there will be no audience in the studio, nothing can replace the buzz of live performance – and it’s the fast-paced hive of activity, energy and element of discovery which only a festival can deliver that we’re looking to recreate on top  The festival started life as a mad seed of an idea that I thought might work, as a collective outlet for the artists within the agency in the midst of what has become the most challenging year for anyone working in live entertainment. The more we dug deeper, it became apparent that the rapid advances in streaming technology and live facilities could be utilised to create not only a series of live streams across the roster, but actually a live festival weekend with some of the genre’s most exciting artists. Much to my delight, every one of them agreed to be involved – and we have a fantastic weekend in store for audiences.  As well as the artists’ belief, there is no way the event could happen without the support and encouragement from Creative Scotland* – and so to them, the artists, crews and many hundreds of folks we have tuning in this weekend I’d like to extend my heartfelt thanks. We’ll see you on the other side”

Musician and broadcaster Anna Massie, appearing at the festival with Blazin’ Fiddles, said: “This is our first fully live gig since early March 2020, and we can’t wait to get back on stage together. A such a long break, there’s a bit of trepidation about performing live again, but the overriding feeling within the band WhatsApp chat is one of excitement. We’ve had to remember how to put a set list together (there’s a separate WhatsApp solely for set lists) as well as how the arrangements actually go!  There’s always a different kind of energy surrounding a festival performance, and we’re delighted to be taking part in this weekend event. For one thing, we’re really looking forward to hearing Ímar play live on Friday – as exciting as it is to perform, it’s also a wonderful thing to hear and see a live gig. We’ve all missed the social element of touring as well as the playing, so although we’ve just got one day “on the road,” we’re determined to make the most of it and enjoy every minute of the gig and hope the audience has as good a time as we do!”

Siobhan Anderson, Music Officer at Creative Scotland commented: ““This weekend of outstanding traditional music will be a real solace for audiences in this difficult winter. People are craving the experience and excitement of live music, and this looks to bring just that to living rooms across Scotland and beyond this weekend. The line-up is outstanding, showcasing the cream of Scotland’s traditional music scene as well as international artists of note. Not only will the weekend give artists a much desired opportunity to play live for audiences, it also involves a crucial support team behind the scenes to make it all happen. CCM Live is an amazing opportunity to catch your favourite acts live for what may be the first time in a year, or take a risk and discover something new.”

For further information on the festival and to buy tickets, visit ccmlive.co.uk/tickets

*Creative Scotland is the public body that supports the arts, screen and creative industries across all parts of Scotland on behalf of everyone who lives, works or visits here. We distribute funding provided by the Scottish Government and The National Lottery. www.creativescotland.com