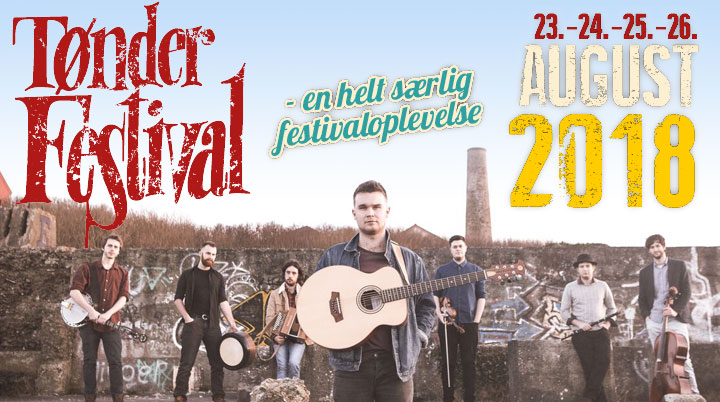 Tønder Festival, is now in its fifth decade as the major folk music festival in Denmark. it embraces both innovation and tradition and is in a league all of its own. The Tønder Festival stages are alive with young people creating music that stretches from folk to roots, indie rock, alternative country and singer-songwriter styles. It is famous for presenting new international names who are on their way up and is also where you can meet stars and veterans on the international and the Danish folk and roots scenes.

The Tønder Festival 2018 programme is now complete – and reveals an impressive array of musicians from Canada, USA, Australia, New Zealand, Hungary, Germany, England, Ireland, Scotland, Greenland, Norway, Sweden and Denmark.   No fewer than 22 international and Danish names have been added to complete the music programme.

Californian country comet Sam Outlaw, who has already appeared at Tønder Festival .will be making a return along with Parker Millsap, who won over the Tønder Festival audience in 2017 with his solid, blues-inspired roots rock.   Two new American musicians will be appearing for the first time: JD McPherson, who has worked with Parker Millsap and with Black Keys’ Dan Aurbach; and the new outlaw-country name Paul Cauthen

From East and West in Canada

From Canada’s east coast come The East Pointers, with a fresh take on traditional folk music; and the country and bluegrass band Pretty Archie.  Then there’s the duo Jolie Holland & Samantha Parson, who played together in the alternative country band The Be Good Tanyas almost twenty years ago.  Samantha Parson is from Vancouver, Jolie Holland originally from Texas.

The Best of Irish and Scottish

The group Lankum, who last appeared at Tønder Festival under the name Lynched, are specialists in traditional song and have just won two prizes at the BBC Radio 2 Folk Awards.  They are setting out for Tønder from Ireland along with the veteran band Lúnasa, a heavyweight in Irish traditional music.  Representing Scotland are The Elephant Sessions, who played at Tønder Festival in 2016, and who have seen themselves compared favourably with Shooglenifty and Peatbog Faeries.

Two Swedish celebrities have accepted an invitation to appear at Tønder Festival this year. One is Sophie Zelmani, who won fame in the 90s with her folk-inspired pop music, and who has just released her 11th album, My Song. The other is that colossus of the political music scene of the 70s, Mikael Wiehe, whose commitment and workload have not diminished with time.

Tønder Festival is repeating last year’s successes. The Women’s Circle and Gentlemen’s Circle – afternoon concerts by Danish and international songwriters sharing the stage: an artistic and  gender-specific concept, matching writers who normally do not meet, potentially sparking spontaneity. This year, Women’s Circle includes Tami Neilson from Canada, Irish Mythen, from Ireland, living in Canada, from USA The Secret Sisters, who are sisters Laura and Lydia Rogers, and Danish Annika Aakjær and Laura Mo. Joining the Gentlemen’s Circle are Jeffrey Foucault and Luke Winslow-King, both of USA, William Crighton from Australia and Joey Landreth from Canada, with Dane Søren Huss.

For a full line up and more information go to www.tf.dk