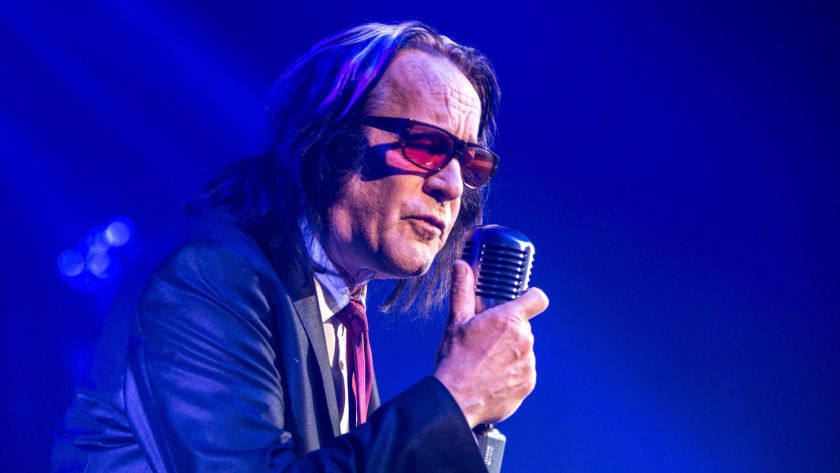 So, Todd Rundgren, the Nutty Professor of rock’n’roll returns, but this time to your living room via his 2021 Clearly Human virtual tour, featuring 25 performances, each tailored to a different US city but all emanating each night from Chicago. The 8pm start time may be OK in the land of Uncle Sam but this bleary eyed reviewer watched the two and a half hour stream unfold at the ungodly hour of 1am, only initially jolted from my torpor by the sequined tuxedos of Todd’s merry men.

Rundgren looked svelte and animated with his expanded 10-piece band performing a set that featured his entire 1989 R’n’B infused classic ‘Nearly Human’, together with an off kilter selection that featured deep cuts from his less commercially successful records. So, little or nothing of the tortured genius that gave us those ear catching melodies of the early seventies, but his dip into a less familiar oeuvre only highlighted that the man whose eccentricities and restless spirit took him on a different journey and captured a devoted audience, was hoarding jewels that certainly captivated this reviewer.

Always at the cutting edge of music technology ‘Nearly Human’ was recorded live and was an early example of digital recording that marked a massive return to form for the maverick tunesmith. Rather than play the whole album chronologically Todd instead eased his way into a ballad heavy set – well it was Valentine’s Day after all! – with a couple of familiar classics. ‘Real Man’ always was a one of a kind song that married new electronic music with his intrinsic pop sensibility and it sounded as fresh as ever. ‘Love Of the Common Man’ followed, another masterpiece taken from his ‘Faithful’ album – and another record that bit the dust thanks in part to the largely impenetrable ‘Initiation’ LP that preceded it. It’s never been an easy path for this rock’n’roll maverick but it’s always been interesting.

I hadn’t seen Todd since his spellbinding Knebworth Festival set in 1976 and though his voice strained on the higher notes he nevertheless proved a still captivating presence. It has to be said that he was aided in no small part by his band and stellar vocals from his backing singers, but there is something endearingly self-effacing about Rundgren. You know he has far too much talent for his own good at times, but it’s his chutzpah and sheer bloody mindedness that has sustained his career, so who are we to argue if he doesn’t always play the game.

Case in point was his decision to include excerpts from his ill-fated Broadway musical based on a Joe Orton script. In a sense these selections kind of summed up Todd’s career as he veered from the ridiculous ‘Smell Of Money’ ( a bizarre Topol meets Brel type showtune) to the sublime ‘Parallel Lines’ which touches the soul and for my money is one his most effecting ballads. If only he had a filter!

The one time this slim, trim and remarkably fit veteran of the rock wars belied his age was when he forgot the opening lines to ‘Can’t Stop Running’ and the fun didn’t end there as our hero nearly lost his trousers later on – chuckling as he described the tune as a real pants loosener. Overall this was a joyful occasion and apart from a few minor glitches both Todd and the band seemed to be having a blast playing to the handful of people able to attend in person and sit safely distanced amongst the virtual audience.

Videocasts will never be a substitute for the real thing but this was a welcome diversion from the lockdown and had the added bonus of being phone and blather free!