Third Album “The Rivers will Flow” from Americana band, The Malingerers 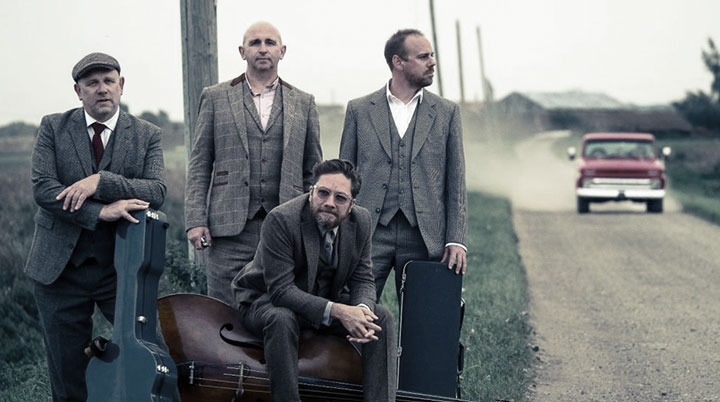 The Malingerers, release their upcoming third album ‘The Rivers Will Flow’ on Fat & Bulbous Records in March 2018. The seven-track LP and will see a slightly more acoustic style but still blending vintage dust bowl era Americana seamlessly with British Folk and as usual taking in more than a sprinkling of early Jazz and Blues influences.

Whilst the band have clearly been heavily influenced by the music from the other side of the pond, the songs and lyrics all draw on their own personal experiences, history and of course a liberal helping of British cynicism.

In order to give the album a more vintage feel, the band once again opted to record at the all analogue Gizzard Studios in London. The songs were recorded live in single takes (including vocals) straight to 2” tape, like they used to in the good old days, giving the album a lovely, punchy, raw, authentic sound which is so often missing in this digital age.

Hailing from the long gone lonesome plains of East Anglia, The Malingerers’ music evokes a sound sometimes more at home in the south western states of America than the UK folk scene. However, whilst clearly influenced from a melting pot of traditional country, blues, folk and jazz (Hank Williams, Merle Travis, Leadbelly, Woody Guthrie, Bob Wills etc.) their music somehow manages to combine these influences with typically British and Irish flavours, cynicism and warped sense of humour and history!

The Malingerers were formed around 2009 from the ashes of twisted country blues noise mongers; The Surgens. Whilst clearly sharing similar DNA due to the same songwriters and three of the original Surgens members, The Malingerers are an entirely different animal drawing on more traditional acoustic folk, blues and country influences.

After a couple of years of writing and arranging new material (and a few personnel changes!) The Malingerers finally settled on the current lineup in 2012 with Tim Palmer joining on fiddle.

The band’s’ first album, “Lonely Years” which received some excellent reviews by the music press, was released in 2013 containing all original material recorded at Gizzard’s analogue studio in London. By recording everything live (including vocals) straight to 2” tape like they used to do in the good old days, the bands’ recordings retain the sound and feel of the live band whilst giving a raw and punchy traditional sounding album.

The Malingerers’ second album ‘Wine & Lies’ was released to further acclaim in 2016. They have managed to fuse a myriad of styles into their mini album “Wine & Lies” including blues, Django Reinhardt style jazz, Americana and folk. Jack of all trades and master of none? Certainly not when it comes to this East Anglian band. “Wine & Lies” has a rare beatnik pulse to it that drives the collection of seven songs to an early conclusion leaving the listener wanting just a little more. Recorded at Gizzard Studio in London (fast becoming the go to place for many musicians),

“Wine & Lies” has stories sung by great characterful voices and jive by the bucket load, this is a great album to swing by” Americana UK Website

The line up of the band consists of:

You can catch them at a live event at one of the following venues:

For full details and more information visit their website http://themalingerers.co.uk/