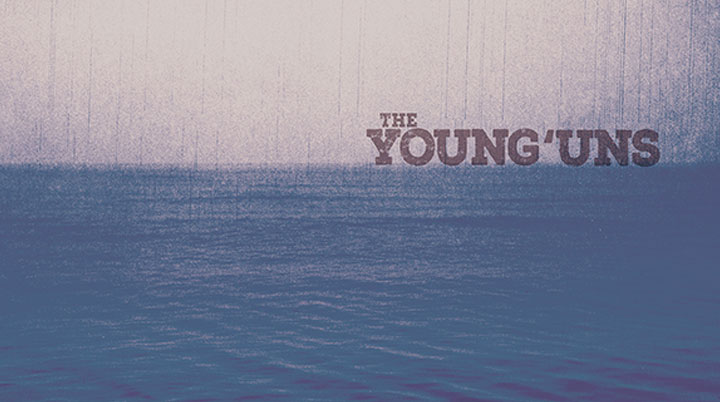 How easy can it be for a trio who sing acapella, admit a love of sea shanties and unashamedly cup their hands to their ears in time honoured trad manner? You’d think if ever there was a niche act then here it is. However I’m describing the Young’Uns, who apart from having a name which is primitively descriptive, have confounded those who consider them a folk revival throwback, they’ve made their unaccompanied repertoire a lively, harmonic, entity which with Strangers enters new fields of relevance. Unlike say the Wilsons an act that regularly crops up in conversation when the Young’Uns discuss approach, they have within their number a songwriter in the shape of Sean Cooney and it is he that gives them the element of consequence and applicability.  In fact you almost say Strangers is a social conscience album with its tales of division, hard conditions, alienation, intolerance and misplaced ideals.

Sharp harmony singing and canny arranging take Cooney’s writing, almost all credits are his bar Maggie Holland’s ode to the physical aspects of nationhood, A Place Called England, first heard by these ears on June Tabor’s dark, secluded A Quiet Life, here it’s galvanised and re-polished to fine effect stating quite plainly that the heart and soul of a nation lies in not in crowns and dominance but in its forbearance and the ground under our feet.  It’s a theme that’s easy to warm to as Michael Hughes and David Eagle glide around lyrics that shock and gladden the spirit by laying down the truth about modern life and exposing the darkness which lurks beneath a thin veneer of respectability. The Young’Uns are champions for the underdog that’s definite, take Dark Water which details the harrowing experience of Syrian refugees swimming the Aegean Sea for the prospect of a better life and safety, the delivery is the aural equivalent of cinematic slow motion, the lyrics clear and telling. The Hartlepool Peddler draws inspiration from the story of how one man who could so easily have been turned away went on to found that oh so British institution most over 40s swear by, Marks & Spencer. There’s a great piece of character writing These Hands inspired by Sybil Phoenix, the first black lady to be awarded an MBE after a life time of community action in times of inequality and blatant racism. There are further deep pieces, Be The Man which details sexual loathing and less than charitable attitudes, Johnny Langstaff bigotry and hatred defined by the actions of one north east man in standing up to the Blackshirts.

Before you think however that it’s all finger pointing songs – to quote one Robert Zimmerman – there are lighter touches, Gahfoor’s Bus which celebrates the worthy bloke who loaded up a charabanc full of supplies in 2015 ( I think) and headed off to serve meals and drinks to the refugees in Dunkirk. Then up comes Bob Cooney’s Miracle which runs the biblical story about loaves and fishes for its money, one man, one loaf, one tin of corned beef and nigh on sixty anti fascists to feed. The theme of outsiders runs the whole course to a very satisfactory conclusion, Cooney, Hughes and Eagle aided by a snappy production courtesy of Neil Ferguson, manage to bring a deal of light, shade, humour and joi de vivre, to an album that describes how small things matter and how ultimately everyone should extend a hand of friendship in a world where self and greed hold no sway. Looks like that third folk award isn’t too far away lads!