The Young ‘Uns offer a ‘Free For All’ tour bonus 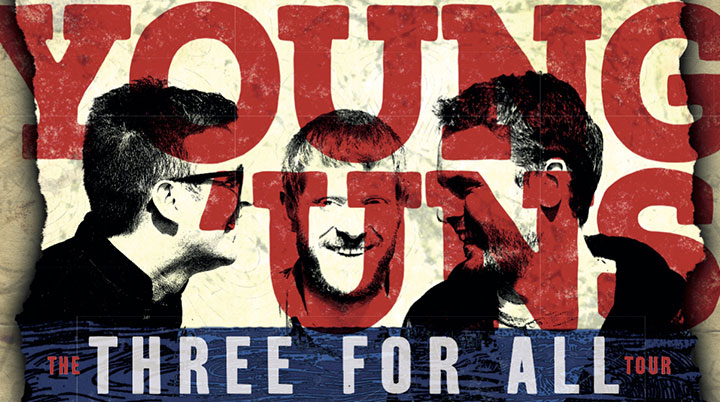 When popular Teesside trio The Young ‘uns embark on their biggest tour of the UK in April they aim to involve communities up and down the country in a series of free pre-gig grass roots events.

In their only UK tour of 2016, Sean Cooney, Michael Hughes and David Eagle, together one of folk’s hottest properties, will set out to play 18 celebrated venues across England, Scotland and Wales.

Their “Three For All” tour (April 13 – May 1) will take in venues including Cardiff’s St David’s Hall, Edinburgh’sPleasance Theatre, Salisbury City Hall and Liverpool Philharmonic Hall.

But on this tour they will be offering added value. Inviting members of the public to “call the tune” they will take time away from the concert hall stages to join forces with people and projects in the environs of their gig towns, with free events mirroring their all-inclusive tour title.

Says singer songwriter Sean Cooney: “We’ve decided to try to live up to the tour name. On as many afternoons as possible we’ll be aiming to do something for free in or around the tour towns. We hope to celebrate the stories behind some of our songs in the places – and with the people – who inspired them, support the work of community groups and causes and sing in places of special local interest.”

Announcing the plan on Facebook the trio said they were open to ideas. “If you know of a good place to sing, a local cause to support, a community group who could use us for an hour or anything else we can do in or near Grantham, Kendal, York, Edinburgh, Sheffield, Shrewsbury, Cardiff, London, Bridgwater, New Milton, Bristol, Salisbury, Canterbury, East Suffolk, Warwick, Liverpool, Durham or Cockermouth give us a shout – we’d love to hear from you.”

Stockton Folk Club’s star graduates have proved themselves a unique proposition – writing and performing a capella or subtly accompanied songs that tell it how it is alongside traditional songs from their native North-East and further afield – songs of conscience, songs of warmth and wit, songs to provoke, songs to inspire.

In 2015 – a year crowned with their Best Group win at the BBC Radio 2 Folk Awards – they performed an incredible 116 gigs in nine countries as well as hosting 20 school projects, three singing weekends and working with Aldeburgh Young Musicians. Renowned for their pitch perfect harmonies and rapid fire humour, their live show undeniably has the human touch.

Patrons of Suffolk’s fast growing FolkEast festival, the trio will be reaching audiences old and new on the April tour, kicking off at Grantham’s Guildhall Arts Centre in Lincolnshire on April 13 and ending at The Kirkgate in Cockermouth, Cumbria on May Day. As well as the shows in Scotland and Wales the tour will take in 11 English counties.

They will be supported by County Wexford singer songwriter and one woman powerhouse Irish Mythen. www.irishmythen.com.