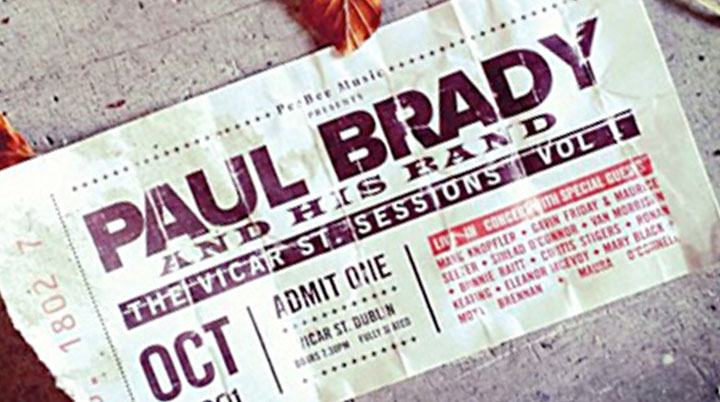 In October 2001, Paul Brady packed out an amazing 23 night run at Dublin’s Vicar Street rock venue, in support were his regular band – tight enough – and what can only be described as a stellar guest list. The names roll so casually off the tongue that it’s all too easy to forget that Brady built his rep from folk roots right through to the commercial edge by hard graft and risk taking. So, by the time of his concert series Mark Knopfler, Sinead O’Connor, Bonnie Raitt, Curtis Stigers and Van Morrison no less, happily rolled around to share a stage with the self- effacing man from Tyrone. That’s as well as en masse the Irish trad crowd- who provide a ceilidh interlude – in support on The World Is What You Make It, though there are so many highlights this is one of those CDs which makes you wish you’d been there.

Obviously these are snatched moments from a whole slew of gigs but it says much that even within the relatively small space of thirteen tracks Paul Brady allows his guests the elbow room to be themselves or perform their own work and not spotlight his own compositions. Thus Van Morrison glides easily through Irish Heartbeat, O’Connor is at her most autumnal on In This Heart, Eleanor McEvoy is thoroughly brilliant duetting on the emotional tug of Last Seen October 9th.

Of those who dip into the Brady catalogue, all hail Bonnie Raitt who manages to be rock, bluesy, Irish and Americana in one breath taking cut, Gavin Friday delivers a rough house Nobody Knows undoubtedly rescued by its composer on the chorus and though it’s not the sort of thing I’m given to typing, I have to admit Ronan Keating and assembled musicians deliver a belting version of Long Goodbye, a fantastic guitar solo from Jennifer Maidman lifts the roof and the audience go wild. The inevitable Forever Young as encore is agreeably sentimental yet thoroughly appropriate as Brady at the centre of an incredible concert climax takes the applause for  what must have been some experience. Bound in well thought out cover and a booklet that gives all the background, this isn’t a Best Of, it’s homage to and celebration by one of the Irish artists to have a lasting impact on wider music. Paul Brady is a real hero. Hopefully Volume 2 will be just as exciting.