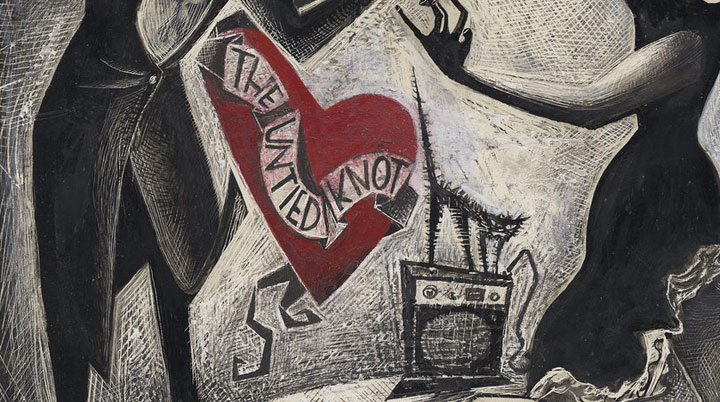 Acid Croft, the original and genuine, since 1990. Now with added mouth music. Accept no substitutes. Most I guess would have been quite contented with another straight forward Shooglenifty album, but when you’re the originators of a whole new funky Caledonian genre then resting on your laurels isn’t an option. The question is not if but how to progress? Look inward whilst still pioneering outward, as Shooglenifty lighted upon Kaela Rowan, already in house as label mate and occasional guest, expert in the ways of puirt a beul, – Gaelic mouth music- she connects with their roots and moves the band gently into vocal work as well as being just as cavalier as they are. So dotted amongst the credits is that strange beast Trad Arr, which they adapt without a second thought and smoothly integrate into the overall melodic groove.

For indeed The Untied Knot does groove, once warp speed is attained the internal rubbery bounce begins, Samhla Reel/Scolpaig is breath taking as the energy crackles, the track drives like a jack hammer gone rogue. Not content with having Rowan on board, he who is everywhere at the moment Ross Ainslie brings his pipes and whistles to the party adding further ethnic sounds to the palette. Though lest you think all this Scottish influence has meant that the Shoogles have forgotten there’s a big wide world out there, The Highroad to Jodhpur and haunting Fitzroy Crossing should signal that they’ve lost not one ounce of their global crusading.

New mandolin picker Ewan MacPherson earns his spurs with three tracks of which The Devil’s Breath Hornpipe shows his skills mutating folk forms into other shape, The Untied Knot itself has beginnings in Burns’s Tam O’Shanter smartly conjured by bassist Quee MacArthur. There are shots of psychedelia about The Arms Of Sleep, though what remains long after the CD has stopped spinning is the way Kaela Rowan’s earthy though sweet vocals break through the wonderful Shoogelnifty haze with directness and clarity, Mile Marbhaisg twinkling as it closes out the opening track with the promise of more to follow, which indeed is fulfilled by track 10, a mouth music collection that twists and flickers around her vocal gymnastics. Lots more please troops!

All bound in a unique John Byrne cover – remember your old Gerry Rafferty, Stealers Wheel and Beatles albums? yes that’s him – and with standard of packaging most other bands dream of don’t take as standard, you shouldn’t even need the slightest hint to own this forthwith. Inspired.