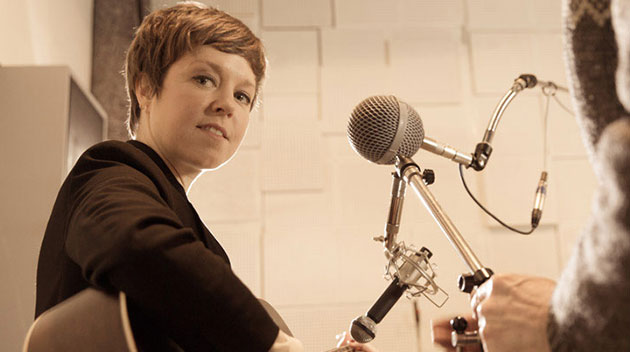 Emily Barker’s career has gone through many incarnations, and as a performer she is as happy performing solo to a small audience as she is fronting a band to thousands. Her songwriting alone has a depth that few attain, her most recent album with the Red Clay Halo ‘Dear River’ being a tour de force of songwriting and composition. The album garnered five star reviews and won album of the year in the 2014 Spiral Awards.

Barker is also an accomplished composer for TV and film, from the theme to the UK Wallander to a full soundtrack for the upcoming film Hec McAdam. Then there are the songwriting collaborations, the latest being the trio Vena Portae, their eponymous album being nominated for a Spiral Award again this year.

Then she decides to step away from the Red Clay Halo.

With that band on a hiatus Barker seems to stand at something of a crossroads, a situation that she clearly relishes. One thing she hasn’t done to date is to record solo versions of any of her songs, despite regularly gigging solo in between band and trio tours. The Toerag Sessions is her correcting that omission. Emily has been committed to audio excellence and the highest production values across all of her work, for this album she has gone back to old school analogue excellence by recording in Toerag Studios in London. Run by Grammy Award winning producer Liam Watson the studio is an all analogue Aladdin’s cave of vintage recording gear.

The Toerag Sessions is an intimate, emotional and engrossing album that showcases all of the experience and sheer quality Barker possesses as a performer. Watson has captured the essence of Emily on these recordings, all done in single takes with no tinkering afterwards.

This review was done from the vinyl which showcases just what can be achieved from the analogue route. Being mastered direct from the two track tape results in superb quality, Emily herself describes the process ‘To keep the analogue integrity, the vinyl was mastered direct from the tape at Gearbox Records in Kings Cross, London, which is where The Red Clay Halo and I recorded our EP Songs Beneath The River, direct to disc. They have such a beautiful high-end analogue mastering studio with a cutting lathe, and with their attention to detail, it was the perfect next step in the process, all finished off with pressing at Optimal in Germany, widely regarded as one of the best vinyl pressing plants in the world. Even with the CD, there has been no processing, with the digital tracks being taken directly from the tape through high-end convertors. The result is about as close as I think we could have achieved to the actual live sound in the studio.’

The Toerag Sessions is quality from beginning to end. There’s an amazing array of formats and special editions on Emily’s Pledge Music page at pledgemusic.com/projects/emilybarker – grab them while you can.