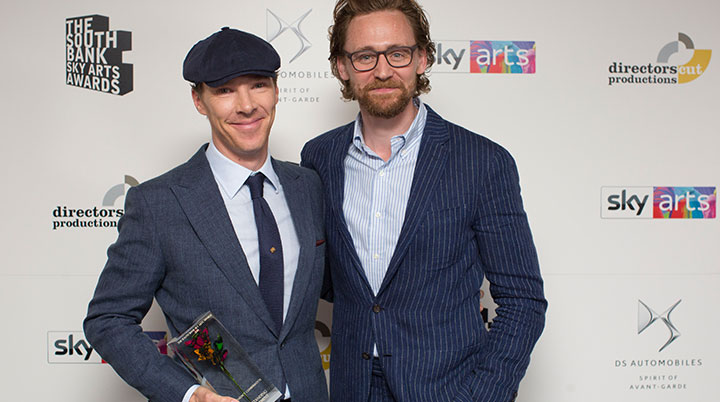 The South Bank Sky Arts Awards are the only awards ceremony in the world to represent the entire spectrum of the British Arts. This years awards, presented on the 1st july, saw a host of artists from the entire spectrum of the arts celebrated for their achievements, with Benedict Cumberbatch the recipient of the coveted Outstanding Achievement Award.

Hosted by Melvyn Bragg, The South Bank Sky Arts Awards continued its legacy as the only awards ceremony in the world to celebrate the complete range of the arts, with categories for TV Drama, Classical Music, Theatre, Comedy, Dance, Film, Visual Art, Pop, Literature and Opera.

Other winners on the day included the deliciously dark Inside No. 9 for Comedy, the eloquently poised maliphantworks for Dance and politically pertinent The Jungle for Theatre. The awards also celebrated emerging talent, with The Times Breakthrough Award this year presented to Nubya Garcia, a multitalented saxophonist whose debut recordings and live performances have transcended the jazz scene.

The awards added a personal touch for this year’s winners, as many of the presenters of each category had a connection with the respective recipient. Presenters included Germaine Greer, an early champion of winning artist Rose Wylie; and Classical Music presenter Guy Garvey, who has performed with Sir Mark Elder, conductor of the victorious BBC Philharmonic and the Hallé. With a host of artists performing on the night, including opera singer Danielle de Niese; remarkable country duo The Shires; hip hop infused saxophonist Soweto Kinch; and an expressive reading by Stephen Mangan, the awards were a dynamic celebration of British artistic excellence.

Outstanding Achievement Award winner Benedict Cumberbatch said: “I am quite flabbergasted to be receiving this award especially when looking at past recipients. I am needless to say immensely grateful and humbled. The South Bank Show has always had a place in my heart as being an inspirational exploration of the best of culture so to be recognised in this way by Melvyn and the show is incredibly flattering and I am very humbled to be this year’s recipient. Many many thanks.”

Melvyn Bragg said: “This is as strong as any list we have ever had. The arts in the UK, a £92billion industry, are second only to the US. Regrettably, government policy in cutting arts teaching out of so many schools fails to take this on board. This year’s awards celebrate what can happen when arts are encouraged from school-age onwards.”

COMEDY – Inside No. 9 – BBC Two
Presented by: Mark Gatiss