The Show Will Go On. 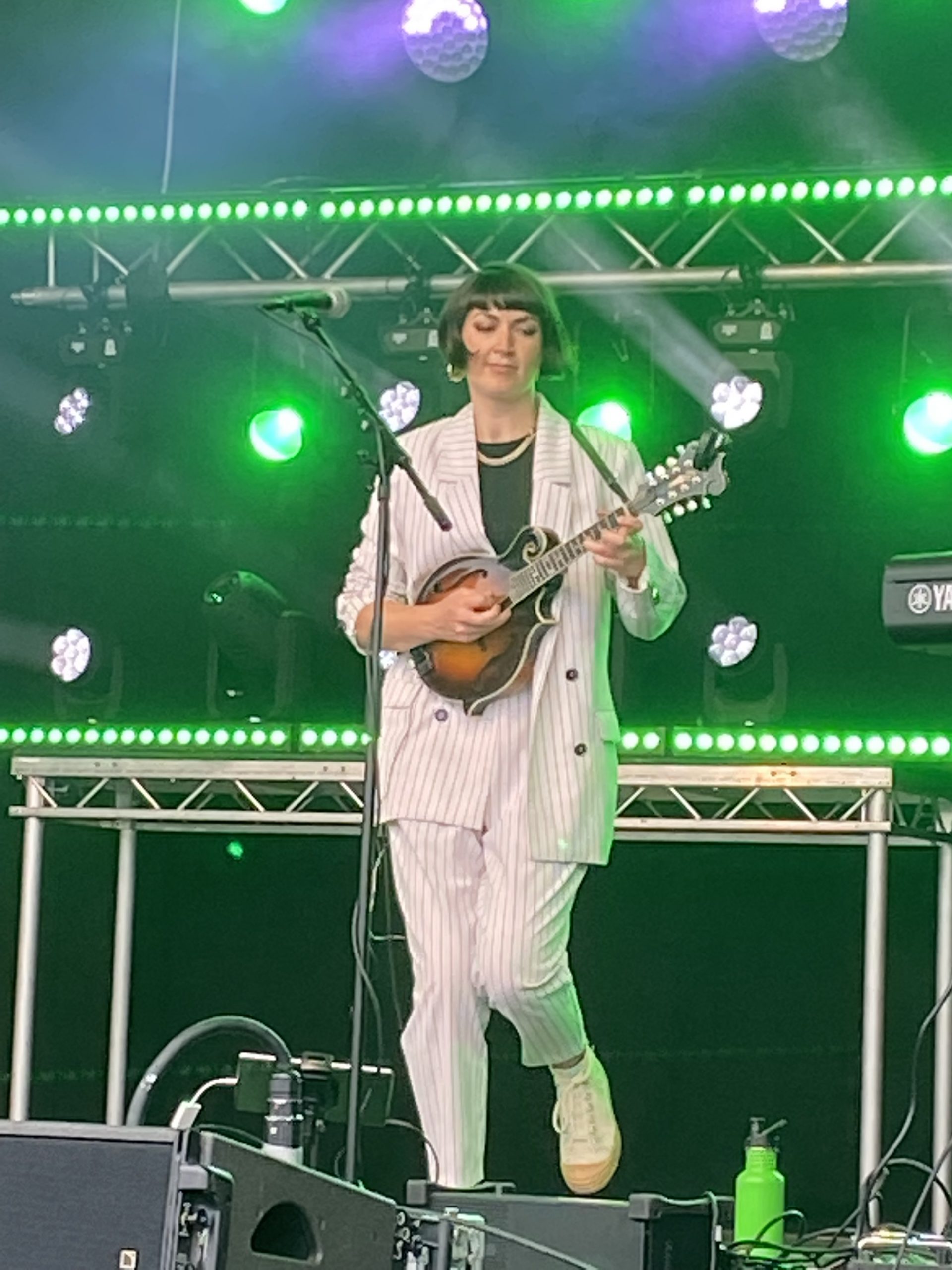 As the folk world slowly opens to a musical landscape constantly shifting and coming to terms with the limitations of a continuing pandemic, amidst festival cancellations galore, Simon Jones ventures to one of the few, brave survivors, Shrewsbury.

“The weather’s been great so far, shame it’s a bit cloudy today, the thing is it’s dry though,” says Katie at the Press desk when I pick up the passes. It feels like old times just now, morning on the green grass of a folk gathering, somewhere off in the distance a Morris team is entertaining the first wanderers onto the site and a merry jam is underway in the session tent through a bunch of reels. On the stages the roadies and sound engineers are making last minute adjustments before the entertainment gets under way. There’s tempting smells and signs of activity on the stalls in the food court, you can buy anything from a CD by last night’s headliners to a rather dodgy looking leather hat or maybe even a vintage festival T shirt in the market area. It feels like old times –  but of course it isn’t, it’s now and Shrewsbury has had to battle to survive, to go ahead at all it’s had to drastically alter its approach and organisation.

“Isn’t it great to be at a festival again? Hearing music in the outdoors with friends and family…” Johnny Kalsi – of Monday’s star attraction The Afro Celts- surmised from the stage. Well, yes it was but the reason for everything hasn’t gone away, the pandemic is raging around the country, maybe in a less virulent strain but it’s causing deaths in high double figures each day. “Hope they don’t have this format next year,” one unreconstructed optimist was giving loud voice at a picnic bench, he seemed to be in a huff because there weren’t any marquees or chairs for festival goers to sit on, never mind the fact that Covid would be more likely to infect people under such circumstances. Simple facts cannot and should not be arged with for the greater good. I mean in 2020 everything was cancelled for most of the summer, though I did manage to get to see one live gig. Socially distanced with a bluegrass duo on the bed of a truck whose sides were taken off especially, royally entertaining they were too. Take a bow Truckstop Honeymoon, who by happenstance are here on the bill at Shrewsbury.

2021 began with total lockdown and predictable consequences, festivals of every stripe pulled/postponed by the bucket load, Cambridge being perhaps the most well-known of the roots casualties. Some held out knowing there would be an end in sight but limits on numbers got to Cropredy at virtually the eleventh hour, others too gave in to the near inevitable. A small number however remained both determined and practical, committed to run even if it meant changing and stop gap measures to do so, Folk East, Sidmouth and Shrewsbury amongst them.

So here we are, festival underway and some changes are easy to spot. There are – for obvious reasons- no huge marquees or indoor events of any kind. In their place are two sizeable outdoor stages with screens either side which relay the action for those to the rear of the site. First up it’s The Trials Of Cato, recently having released a single of ‘Bedlam Boys’ and sporting a brand new line up featuring Polly Bolton on mandolin. Last viewed at the 2019 BBC Folk Awards, they’ve changed their  repertoire and Bolton adds an arresting on stage dynamic resplendent in white suit, swaying and moving with the pattern of the reels and tunes they’re serving up. These are stretched, elasticated and reshaped much to the delight of the dancing crowd at the front. A quick peek into the heaving throng reveals even here social distancing is being maintained with clear gaps between individuals. Cato meanwhile switch between instrumental and song with apparent ease and launch into a super rendition of their new single which winds its way around the site in a hypnotic snake like fashion, the vocals suitably gothic on a tale of madness and lunacy. Bit by bit The Trials are introducing subtle use of electrics, a bass here and keyboards there, never done gratuitously though each time it’s for the betterment of the music. They leave us with another super charged melody, hoping to see us somewhere soon, the crowd roar and I’m left pondering the potential wonders of their upcoming album.

A gentle stroll across the site which has been taken over by the majority of this year’s campers has tents in discreetly marked areas with so much space the worst drunk couldn’t trip over the ropes and pegs. Heartening to see as well are the queues for refreshment again with festival goers respecting distance between each other and that’s even in the line for coffee and hot chocolate which is about as long as your average race track. Most people are wearing face masks too.

A rumpus disturbs Mrs. J and I as we sip a warming pre-lunch cocoa, it’s quite melodic and seems to be coming from the other stage. With drinks in hand we make our way following the music, bumping into associates Gary and Sarah when we reach the stage. The rumpus by now is reaching a climax and Gary handily gives it a name. “These are Sheelanagig, I rather like them,” he informs. Sheelanagig it appears are an amiable bunch of West Country lunatics who like to take a gypsy bedrock and salt it with all manner of styles and genres. Captivated I note the flute player seems to think he’s in Jethro Tull, standing on one leg a la Ian Anderson whilst the fiddler must be on a mix of LSD and Nitrous Oxide, grinning and lurching round the stage. His introductions surely the product of a bad acid trip and an overactive imagination. In reality their OTT antics belie their actual ability, all summed up in a blistering charge through a set of Breton tunes re-purposed as melodic fireworks. Predictably they conclude to a standing ovation from the assembled. Gary & Sarah approve.

Shrewsbury acted early to secure their artists, even if it meant postponing the appearance of over-seas acts who had probably pulled out anyway given the chaotic conditions regarding international travel. The organisers to their credit managed to conjure a superb array of British artists across the festival and in some cases did several acts a favour by giving them the exposure. The Welsh contingent were strong, Calan have always revelled in their roots refreshing ancient customs like step dancing and old instruments, the pibgorn, all whilst maintaining a thoroughly modern image. However all of Calan are also involved in Pendevig, they were playing Shrewsbury on an exclusive, the band are a culturally funded Welsh phenomenon. They mix their folk roots in with just about anything you can fit in a cultural blender, they’ve material that comes across like the latest dance act on Radio 1 all thumping grooves and rhythm samples and next your listening to harp and fiddles flowing like a Snowdon mountain stream. They were jaw dropping.

Kate Rusby comes across like we’re all sitting in her lounge listening to her play some of her favourite songs. She’s a very down to earth approach and a cracking band, note the inclusion of one Duncan Lyall on keyboards, his ‘ Milestone,’ album from early summer is one of 2021’s best. Damian O’Kane leads them and they back Miss Rusby superbly with a selection from what she claims isn’t a covers album but just a collection of songs she enjoys, ‘Hand Me Down.’ We get Bob Marley’s ‘Three Little Birds,’ a great Lyle Lovett cover and a long rambling tale about The Bangles and how she was messaged by Susanah Hoffs before ‘Manic Monday,’ is given the typical Rusby remake. ‘Friday I’m in Love,’ makes us all feel fuzzy and romantic, Kate taking non folk material and making it feel ages old.

I fall to chatting to people around about how they feel about the acts, approval’s voiced for the majority, “Lindisfarne did a great set,” one chap offers, “it took me right back to seeing them in the early 70s, I’d love to see them here again,” obviously Tyneside nostalgia runs deep. “I liked Seth Lakeman, he always puts on a  great show,” says a passing steward. Obviously the Satisfaction level’s very high.

Rounding off the festival The Afro Celt Sound System began with a blanked out stage and one lone voice delivering acapella Gaelic before all guns blazing lights, colour and surge of electro trad, reels dancing over chattering beats and sound samples. Fiddles, flute, low whistle feather light ripped alongside the African kora and dohl drums of N’faly Kouyate and Johnny Kalsi. Main man Simon Emmerson staying chiefly in the background providing filling chords on guitar. “ Desert Billy,” proved a jigging high light, Peter Tickell’s fiddle lines sending everyone home with a huge smile on their face and justifying all the changes/restrictions which Shrewsbury’s organisers had put into place. The punters too can take credit for respecting rules, regulations and each other. Sure things had been different but it was validation enough that Shrewsbury 2021 got through with credentials intact, colours flying, reputation boosted and enhanced. Surely it belongs in the major league now. More power to them, the best is yet to come.