The Magpie Arc,  the cross-Border band out of Sheffield and Scotland,  takes flight in 2022 with selected tour dates and festivals.

Featuring the multi-award winning talents and wide musical influences of Nancy Kerr, Findlay Napier, Tom Wright, Alex Hunter and Martin Simpson (on electric guitar!)  they formed from the idea of bringing together a group of established folk musicians who would mix their song-writing styles and musicianship, in a full-on electric band,  to create exciting new music and update the classic 60’s and 70’s British folk/rock sound.

Having three strong writers,  the focus has naturally been on new material, however they’ve also tackled some great covers plus their own re-workings of traditional songs. There’s folk and rock, some country and even blues, but whatever the genre the band are already proving to be a musical mix of everything you could expect from such a line-up, with excellent songs, lush harmonies, scything electric guitars, gorgeous fiddle lines and rock solid bass and drums – the possibility that this cross the border collaboration can bring something special and unique to today’s folk scene becomes obvious very quickly.

With twelve songs recorded just before “it” hit, the band released a trio of four track EP’s on their own label in late 2020/early 2021 and since then have been studio-bound recording songs for their first full length album which will be released in Autumn 2022.

The growing buzz about the band and the anticipation amongst those in the know will all become clear very soon as they hit UK stages in June, September and November, including their very own “Indoor Festival of Folk” in collaboration with EFDSS at Cecil Sharp House, featuring the band, plus Knight and Spiers, Bella Hardy, Blair Dunlop, Lizzy Hardingham and Maddy Prior and Peter Knight in conversation with Matthew Bannister (Folk On Foot Podcast) and UK festivals,  including Beardy Folk Festival, Cambridge Folk Festival, Purbeck Valley Folk Festival, Broadstairs Folk Week and Manchester Folk Festival. 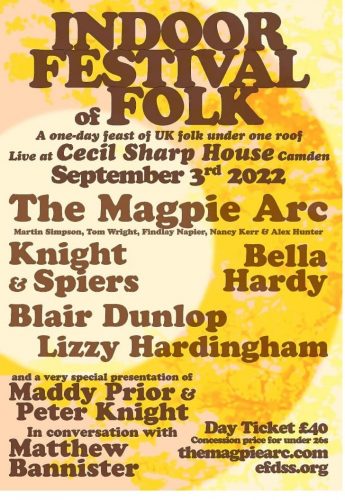