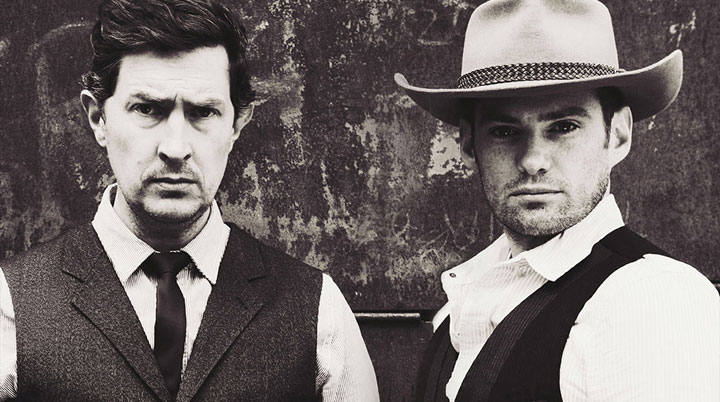 Two of them, they aren’t called brothers and one isn’t called James, but Jamie’s close enough for jazz. Delightfully tongue in cheek but at the same time serious in their music, James Fagan and Jamie McClennan, (other halves of Nancy Kerr and Emily Smith,) share not only a southern hemisphere start in life but rootsy upbringings  leading to an abiding fascination with colonial folk sources. From Australia and New Zealand respectively the pair dive in head first with period dress, bush hats and three days stubble, looking just like they come off a drove across the outback!

However behind all the theatrics lies the plain truth, they know exactly what they’re doing and they do it well.  Nor are they scared to pull from established sources or those more left field, f’r instance the most well known item is surely The Ballad Of Ned Kelly penned by Trevor Lucas it’s a staple of every Fotheringay fans collection, even turning up in Fairport’s repertoire at certain points, or consider Split Enz – a New Zealand art rock band – whose writers used to play the same circuit as McClennan, they deliver Six Months In A Leaky Boat. Thankfully neither go for the ‘adopted’ Australian accent when singing  and both have warm, appropriate vocals, the best example to these ears This Poison Train, which is about the way Australian outback communities lost rail services and with that so much more. Instrumentally there are three tune sets which showcase the dexterity of the picking both possess, twist my arm and I’ll opt for The Snow Walk penned by McLennan. Could be about all the snow New Zealand gets dumped on it each year, then on the other hand it could be about a walk in the snow. What do I know? I know it’s a neatly strummed tune that turns gently into a showcase of folk guitar.

All this produced up in Scotland, ( no I’m not making this up,) so far from the inspiration Fagan and McClennan must have had to channel images of home with devout concentration. Neat packaging enhances the whole thing, a tidy little effort. If you’ve never got beyond an occasional Bushwackers album ( I recommend them whole heartedly too,) then this is a good place to begin looking beyond familiar horizons and what’s more The James Brothers tour here so no need to buy a return ticket down under!