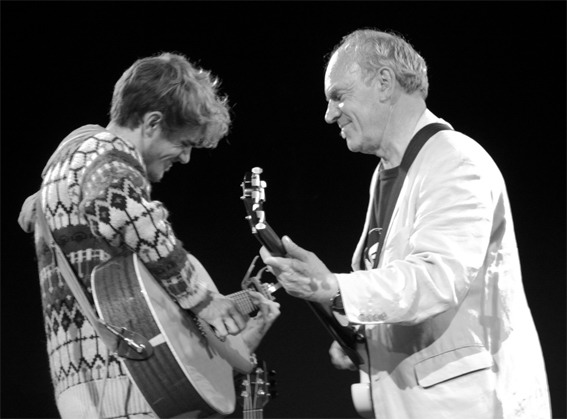 Interviews, biographies, features and writings abound about renowned folk icon Ashley Hutchings, (The Guv’nor) and his work with folk and traditional music is well documented. But on 1 July 2022 people will get to know more about the life and interests of this talented man with the release of a monthly Podcast. on Patreon – Ashley’s new approach to entertaining fans.

We have all heard people say of someone close who has died “I wish I had taken the time to ask him/her about…”.  Ashley’s son Blair Dunlop (pictured with Ashley above,) decided he did not want to feel that regret in the future so he has come up with the idea of creating podcasts of the pair of them having informal conversations on subjects that matter to him and be of interest to other people familiar with his father’s career. The result is ‘The Guv’nor Podcast’ monthly recorded interviews about chosen topics.  Except for the title of each episode the candid informal ‘chats’ of father by son is totally unscripted. From his singularly personal position being a member of the family Blair steers the initial conversation with questions and reacts to his father’s replies in a way no journalists can.

Episode One will be available on Patreon free to listeners with future episodes available on subscription. The first five minutes of every new episode will be given away free with the full length episode being available on a ‘pay what you like’ for subscribers. As a bonus subscribers will also be offered a special discount code each month by Talking Elephant Records. The label has been responsible for the release of many of Ashley’s albums for many years. In the first episode Ashley talks about his very early life and how and why music became an important part. Episode Two will feature many ‘never-before-told’ stories about the birth of Fairport Convention and British Folk Rock and how that evolved. Future episodes will feature the pair discussing some of their favourite things including song-writing, playing abroad, theatre, living in the countryside, gremlins and world football.

For Blair this has been an opportunity for him to learn more about his father’s life and ask questions that had been in his mind.  ‘I didn’t think dad would want to do this’ he says ‘ ‘but once we dropped the list of things he thought we should talk about and just chat like pals the conversation flowed and he  really enjoyed it. For me it means I will have no regrets that I didn’t ask him things when I had the opportunity and maybe that will inspire other young people to do the same.’

Ashley is equally enthusiastic about the project – “great credit goes to my son who initially suggested this series of podcasts. When he went further proposing that he should be my foil we were in business. I think it’s a winning combination. Now we’re the Kane and Son of Folk-rock.”

‘The Guv’nor Podcast Episode One can be downloaded here: