The Ghost In Our House and Other Stories – Merry Hell 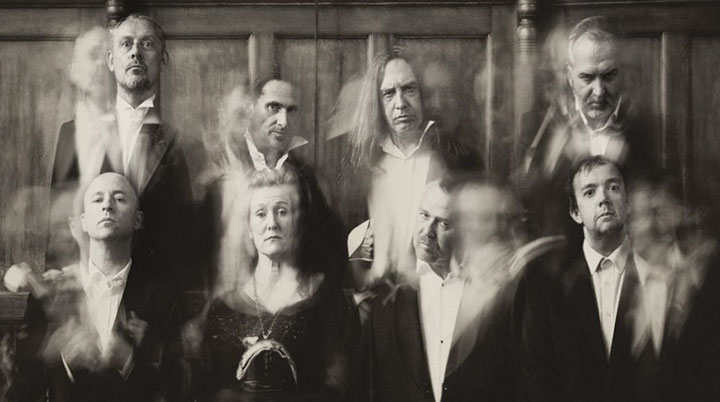 Of the many aphorisms that used to appear on England’s Glory matchboxes one was the definition of a diplomat, it being ‘someone who told you go to Hell in such a way that you would look forward to the trip.’ Well you certainly don’t need a diplomatic invitation to relish Marry Hell’s latest offering – just sit back and enjoy the ride. Well, sit back if you can. The Ghost In Our House is fifteen songs that will have you on your feet and dancing from the opening riffs of the anthemic title track right through the final chords of the valedictory No Place Like Tomorrow. In between, a startling array of clever, witty and arrow-to-the-heart songs full of inventive melodies, harmonies, soaring fiddle riffs and a rhythm section as tight as a torque nut.

Make no mistake, this is a big sound. Not a band to rest on their laurels following the success of their last album (Head Full of Magic, Shoes Full of Rain), six has become eight with the addition of rock-steady Nick Davies on bass and fiddle virtuoso Neil McCartney. Across an album of 15 songs it would be easy to lose impetus but in Lee Goulding and the Kettle collective – Virginia, Bob and John – the band has a team of gifted writers that are able to ring the changes from the anthemic call-to-arms Rage Like Thunder to the Cajun-style No Money, the delicate bittersweet ballad Leave A Light On to the driving dance number Feed Your Soul or the delightful Human Communion, without dropping a beat.

Throughout there is a crisp, clear, forceful mix that enables every element to shine through, from Bob Kettle’s  nifty mandolin lines on The Baker’s Daughter, a deliciously naughty song from the endlessly creative pen of Virginia Kettle, through to Andy Jones’ taut drumming that underpins everything from the four-square powerful plea for peace, The Old Soldier to the on-the-road romp Summer Is A-Comin’, a joyous, clever  piece of writing with a melodic nod to the ancient round of a similar name whilst at the same time anchoring it firmly in the 21st century. The musicianship and arrangements are right on the money, there is not a note out of place and for that extra sparkle Gordon Giltrap adds his signature guitar style to Leave A Light On, producing a moment to savour in full.

The album is beautifully paced and ordered, moving seamlessly across styles and moods. And boy, can these guys write a middle eight, drop in counter melodies and pen a memorable chorus. Taking the commonplace and making it remarkable is part of a songwriter’s gift and they do it beautifully throughout, There are songs of love, loss, hope regret, personal and political, delivered in contrasting voices of clarity and North Western grit.  There are  growling guitar solos, tasty picking, inspired fiddle riffs and licks, driving rhythms and, at times, beauty and grace. You could put this album on ‘shuffle’ and never be disappointed with the outcome. With tours and festival dates a-plenty, Merry Hell will be somewhere near you in 2015. Catch them somewhere if you can.