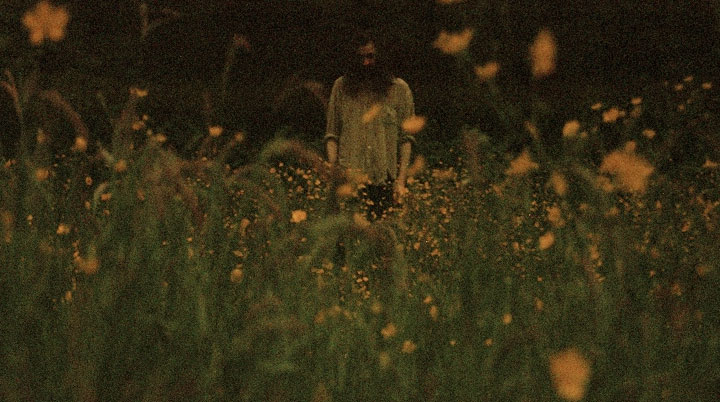 The Garden – which is almost exclusively Robin with guitar – takes cues from the kind of singer writer record that inhabited the racks of the late 60s/early 70s, when the likes of Keith Christmas made albums which contained an acoustic innocence and optimism yet got swept up by the weekly music papers as meaningful statements. If you want me to be more specific, this display has early John Martyn chords, lyrical nods to Robin Williamson and Roy Harper, depending on the track and Nick Drake atmospheres. Yet that’s not to say Robin Adams isn’t his own man, obviously he is, he takes the spirit and logically adapts it to the here and now. Glasgow based the fuzzy cover photos betray more of a meadow than a garden with yer man gazing around him dreamily. Quoting artistic references over musical, he obviously sees his songs as pictures, his lyrics as colours as his Scottish burr delivers compositions which mirror folk form and structure.

There are moments you swear he’s singing a Child ballad Midnight Blood apart from the title, has the repeat structure and is just missing a fa la la chorus cycle, Right To Run sounds Appalachian to these ears borrowing from old time form liberally. Others such as the title track have lyrical reference to debate, though undoubtedly this all harks back to a more guileless time,when it was easier for bedsit bards to be appreciated. However, note too that Adams whilst he may appear to wear yesterday on his sleeve creates these as ghosts and illusions in which to cloak his ideals and fancies, actually he’s more perceptive than you might at first think. Lyrically this is contemporary and tackles issues some might try to avoid, lots of subtle references to the tortured life of Van Gogh for instance. Subtle, parts uplifting and parts introspection The Garden is one of those offerings which like a decent painting makes you stop and consider, I suggest you linger in its presence for a while.

A quiet, hushed album which charmingly out of time and chicly retro sets out its stall with references to past masters, Robin Adams is one canny musician.