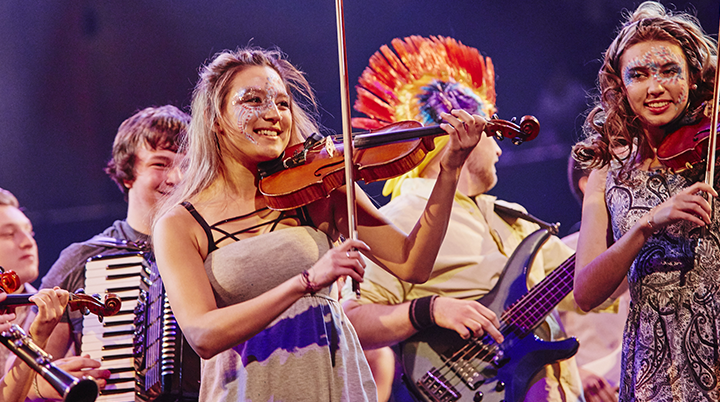 Formed in 1997 by fiddle player and arranger Joe Broughton (The Urban Folk Quartet, The Albion Band, Joss Stone), their energetic live sets are a sight to behold, featuring a 15-piece horn section, five cello players, four percussionists and three electric guitarists, plus fiddles, flutes, clarinets, double bass, even a harp! They also all sing too.

Though rooted in traditional folk tunes, each member brings a variety of personal influences to the set-list, which ranges from full-on rock grooves, funk, jazz, hip-hop, ska and reggae, to gentle ballads and sounds from Eastern Europe and Asia.

“The band are mainly playing with traditional British Isles folk tunes, but they’re not afraid to bring in other influences – last year we had Bulgarian and Japanese tunes too,” says leader Joe Broughton.

‘An entire festival in two hours’ is one popular description of the ensemble as the musicians play, sing and leap about, performing together and also in various duos, trios and smaller break-out mini-groups.

As Joe stresses: “The shows are ridiculously energetic.”

In the past couple of years, the ensemble have performed three consecutive sell-out nights at London’s Royal Albert Hall, and appeared to great acclaim at Fairport Convention’s Cropredy, Shambala, and Towersey Festival.