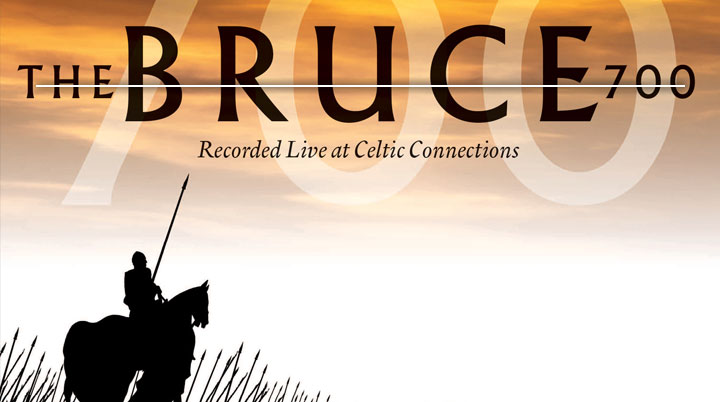 This is a live recording at Celtic Connections 2015 of a commission by Stirling Council to commemorate the 700th anniversary of the Battle of Bannockburn. Composed, arranged and orchestrated by Allan MacDonald and Neil Johnstone. The Bruce involved the skills of the cream of Scottish musicianship from pipes to fiddles and everything in between – the Stirling and District Schools Band and the massed choirs of the Island of Lewis give it some oomph. Traditional tunes and song styles have been incorporated into the orchestral whole, so there is a pibroch and later a keening and lament, but the core of the music is an exploration of a variety of musical motifs through scales and tonics.

The actual battle is one of the greatest events in Scottish history, the defeat of the English Army under Edward II by Robert the Bruce that led to the independence of Scotland. The English were defeated by a much smaller Scottish force that was better led and organised, the retreating English were harried all the way to the border with estimates of 11,000 killed out of an original force of 16,000. In the bloody history of Scotland and England it stood as a turning point after the brutal campaigns of Edward I and gave legitimacy to the Scottish Crown that would reverberate down the centuries to come.

Surprising then that the overall feeling of the orchestral piece is rather sombre. Robert the Bruce is a national hero, King of Scots from 1306 until he died in 1329. He fought tenaciously and with great skill in times that were riven with division at every level (the simple one of Scots v English was just one of many). The battle at the Bannock Burn was a brilliant military victory against a better armed and larger force, one can only imagine what the feeling must have been for the Scottish nobility when the scale of their success sank in. Those events still reverberate today and helped define Scottish identity and the desire for independence – big explosive issues that stir the heart and mind. Whilst it is a quite brilliant musical journey and progression to hear played by a full orchestra, it doesn’t leave me with any greater appreciation of The Bruce, or feel like a celebration of a hero.

These were brutal and horrific times, warfare was more about butchery than chivalry and we can barely grasp what life must have been like. Maybe that is why we go straight from ‘Battle of Bannockburn’ that seeks to capture the chaos of battle into the mournful ‘Caoineadh’ (keening) and ‘Lament’. A march and jig follows this but by then the bitter taste of battle and loss dampens any sense of celebration. The words of the final song ‘Saorsa (freedom for all)’ have a more palatable modern take on that sense of independence ‘Where there is love we’ll find a way/ oh compassion is the only way / happiness will then come our way’.

Something that makes Scottish history so vibrant is that it still feels alive today, indeed as I write this the headlines have Nicola Sturgeon being quoted as saying “In these circumstances, [referring to the Brexit upheaval]  it may well be that the option that offers us the greatest certainty, stability and the maximum control over our destiny, is that of independence.”