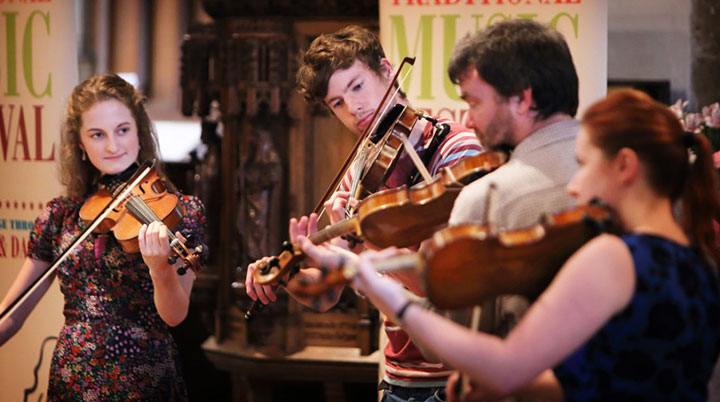 Tyneside fiddle quartet The Bottle Bank Band’s eponymous debut album demonstrates that this band is a bit of a festival’s dream.  Members Sophy Ball, Chloe Jones, David Jones and Stewart Hardy are the only performers on the album and include no guest musicians giving you a true and authentic flavour of who they are and how they sound (big tick). Chloe Jones actually performs on a fiddle made by fellow band member Sophy  Ball (huge tick) and if of course on top of that you like to listen to four fiddlers weaving  harmoniously  in and out of each other with effortless expertise, well, you can probably understand where I’m coming from.

The Bottle Bank can without question stand on their own two (or rather eight) feet with great confidence amongst the talent on today’s folk scene. As yet, they aren’t doing anything particularly ground-breaking, but what they do is varied, carefully executed and pristine in its execution and we should expect great things from them in years to come. From  Shetland tunes such as ‘Da Sweerie Box’ and ‘William Taylor’s Fiddle’ to a composition by Queen Anne’s dancing master (‘Mr Isaac’s Maggot’), with klezmer offerings such as ‘Flatbush Waltz, the band also remain true to their North East roots with James Hill tunes ‘The Wonder’, ‘Bottle Band’ and ‘Factory Smoke’ and several of band member Stewart Hardy’s own compositions.

The Bottle Bank are an incredibly talented bunch with the skill and courage to rely upon themselves to deliver. And why on earth should they not not?  Their debut album is testament to their abilities and I look forward to their next.