With England’s most easterly folk festival, FOLKEAST, on course to return this August, organisers are celebrating by staging a curtain-raiser weekend of shows in June in front of a live audience – with real time streaming.

Over the weekend of Saturday, June 12 and Sunday, June 13, some of the finest names in folk will head to the unassuming village hall of Blaxhall in east Suffolk for the latest staging of ‘The Blaxhall Sessions’. 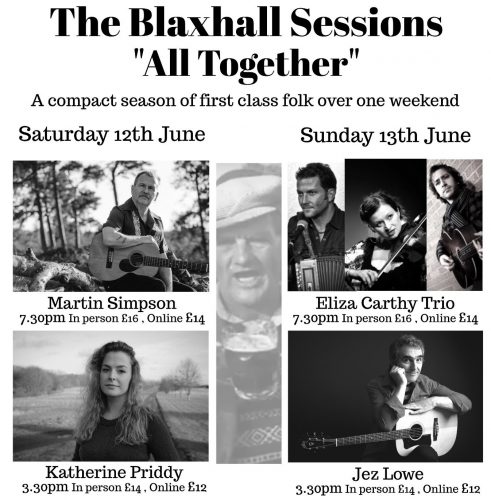 FolkEast co-organiser John Marshall-Potter started the Sessions in 2018 in collaboration with Alan Bearman (Alan Bearman Music) to complement the FolkEast festival which takes place just two miles away in the grounds of Glemham Hall and to salute the folk heritage of a unique Suffolk village.

Blaxhall may be a rural backwater but its name is synonymous with the history of folk music and dance with traditional Suffolk folk singers making their voices heard at The Blaxhall Ship Inn, a stone’s throw from the village hall, between the 1950s and 1970s – some of it recorded for posterity, including the BBC’s short film The Ship: Here’s a Health to The Barley Mow (1955)  http://www.eafa.org.uk/catalogue/5

Opening the weekend of intimate gigs will be one of the bright new names in the genre – hypnotic singer songwriter Katherine Priddy whose debut album The Eternal Rocks Beneath is released on June 25. The great Richard Thompson described the Birmingham-based performer’s music as ‘the best thing I’ve heard all year’ in MOJO magazine. www.katherinepriddy.co.uk

Katherine’s afternoon show on June 12 will be followed by an evening performance by a legend of the scene – Martin Simpson, universally acclaimed as one of the finest ever acoustic and slide guitar players and a mesmerising singer-songwriter. https://martinsimpson.com/

Scunthorpe-born Simpson has been nominated an incredible 32 times in the BBC Radio 2 Folk Awards including a consecutive nine years as Artist of the Year, which he won twice, while his  album Prodigal Son was voted Album of the Year in 2008 and a song from that album, Never Any Good was named Best Original Song

Sunday afternoon sees another stalwart of the scene, County Durham’s Jez Lowe, taking to the stage. One of the most respected and imaginative songwriters in the UK, nobody nails the North East quite like Lowe or can bring it so vibrantly to life in savvy songs, sometimes poignant, sometimes funny, but always on the money.

The final act of the weekend will be no less than the great Eliza Carthy with her Trio (guitarist David Delarre and melodeon player Saul Rose).

A member of the Waterson-Carthy dynasty and a queen pin of the English folk revival, Eliza is a dynamic live performer with a powerful voice and fantastic fiddle skills whose work – whether performing a centuries –old ballad or a new self-penned song – has influenced a whole generation of young musicians. www.eliza-carthy.com

To enable social distancing, just 50 tickets are being sold for each concert.

Says co-organiser Becky Marshall-Potter: “Blaxhall Village Hall is delightfully small so to make it Covid secure, the audience will be delightfully small too. But you can enjoy the amazing artists we have lined up by buying a ticket for the live stream of each concert and interact as an audience member from the comfort of your own home. We can guarantee a top weekend of first class folk.”

Support from the DCMS Culture Recovery Fund has enabled the weekend of music to go ahead. The third season of The Blaxhall Sessions had originally been due to run from September 2020 to April 2021 but all concerts were cancelled due to the COVID outbreak and subsequent restrictions.

Says Becky: “We are extremely grateful to the Culture Recovery Fund which has given us the opportunity to bring The Blaxhall Sessions back to life again in June and reunite artists and crew. The funding has enabled us to purchase equipment and upskill crew members so we are now in a position to live steam these events.”

Afternoon tickets are priced at £14 and evening session tickets at £16 (tickets to watch online are £12 and £14 respectively). No tickets will be in sale at the door but you can buy a maximum of six tickets in advance if you want to be there in person. There is parking available at the hall and a small bar at the venue.