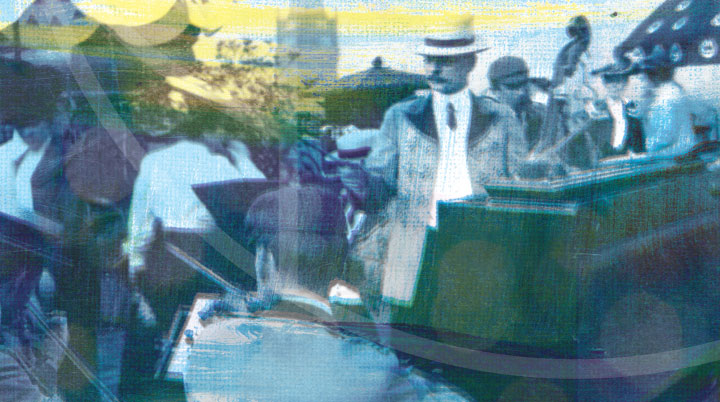 The cover image of a 1920s afternoon soiree on the roof of the Midland Hotel in the city centre,  gives you the idea The Avaiators’ Ball could be the lost soundtrack to a Merchant Ivory historical epic, I don’t think Owens, who’s chiefly known as a jazz craftsman would be too dischuffed with that either. He originally fashioned the core of this collection to fulfil a commission to write for stringed quartet and percussion, throughout ranging wide and free as he calls in not only improvisation – which you might expect –  echoes of 60s psychedelia, the strictures of The Penguin Café Orchestra, though more unlikely trad folk, with a louche take on Black is The Colour by Rioghnach Connolly one of three featured vocalists. Zoe Kyoti’s contribution is thoughtful and wistful, a miasma of woodwinds weaving unlikely lines behind her voice.

Elsewhere the instrumentals tread lightly around, complex and intricate arrangements often featuring Neil Yates (E II and Kate Rusby) who is used to prowling the lines between jazz and folk often blurring them himself. Matt Owens is present on double bass throughout and he co produces alongside Kirsty Almedia. Chiefly arranged by Owens the music’s a sharing with like minds which holds his imprint with crystal clarity. He’s a polymorph this guy but one with a whole bag full of talent and vison for more to undoubtedly follow.