The Association of Festival Organisers celebrates 30 years at November Conference 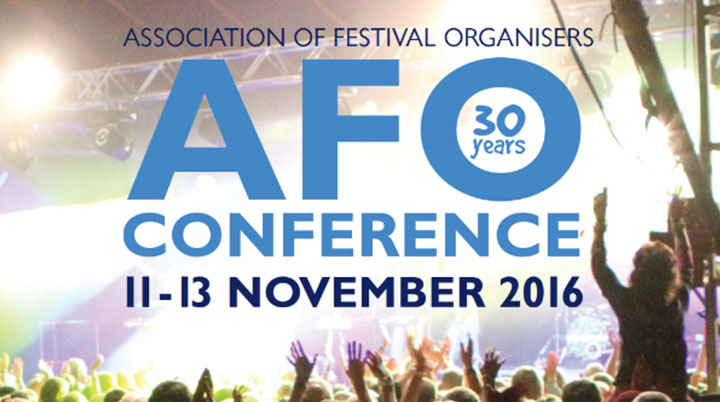 The AFO consists of over 200 festival and event organisers, suppliers, agents and freelance individuals. Since 1986 it has been there to share knowledge and to provide a larger and connected voice for the independent festival sector. Spiral Earth has been collaborating with the organistaion for several years, just have a look at the festival directory to get an idea of the huge range of festivals that the AFO speaks for.

Every November the AFO runs a 2 day networking conference which is open to all in the industry: delegates are an exciting mix of volunteer and professional festival and event organisers, bringing together teams that have been running for generations with first time organisers, new suppliers with familiar names, programmers and marketing specialists.

This year they celebrate the association’s 30th birthday at the annual AFO Conference on 11-13 November 2016 at Ettington Chase Conference Centre, Stratford-upon-Avon. Session rooms and stages will be buzzing with headline speakers, presentations, discussions, ‘how to do that’ sessions and panel debates. The Trade Market forms the all-important networking hub and two Showcase concerts showcase the best up and coming artists on the festival scene.

We have always been impressed at the efforts the AFO goes to, not just for its members but for the festival scene in general, it really is an organisation that deserves supporting. Steve Heap, General Secretary of AFO says “Whatever your role or interest in festivals or events, if you are dedicated to learning and teaching, sharing and networking to continuously improve the scene, you’ll find plenty of common ground at AFO Conference.”

AFO Conference has announced its first speakers and sessions:

Other confirmed topics include PRS; How do festivals attract the 60 million UK residents who have never been?; Women in the Festival Industry, Are there really too many Festivals?
More topics will be announced over the coming weeks.