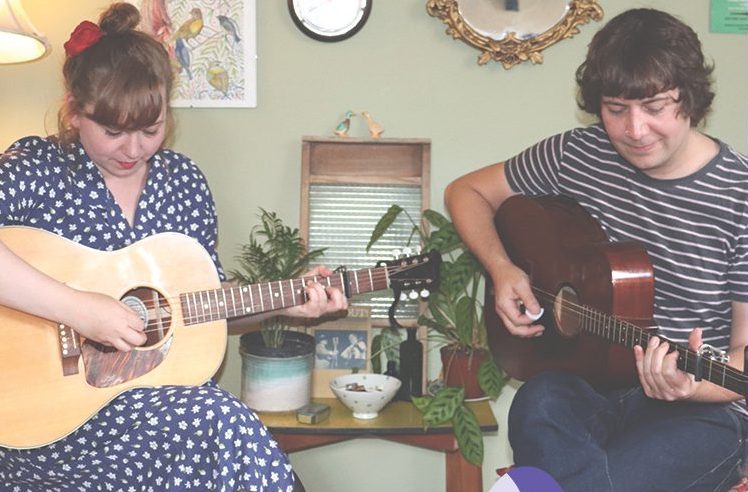 Christina Alden and Alex Patterson have been playing music since they were children and were both raised in musical households in the Norfolk and Suffolk countryside.

The multi-instrumental songwriters have been working together for over seven years,  from their little home in the centre of Norwich. Their music is firmly bedded in the folk tradition of storytelling and their writing often reflects on the relationship between humans and the wild; from unlikely friendships between a wolf and bear, migratory movements of Artic foxes and people across land and ocean and the importance of re-wilding and enabling space for nature to renew.

They have enjoyed touring extensively in the UK and Europe; including a twenty-three-date concert hall tour with Show of Hands,  a show at Glasgow Royal Concert Hall for Celtic Connections, headline and main stage performances at some of the UK’s most prestigious folk festivals and performances in Norway, Belgium, France and Ireland.

They have written and self-released four albums, composed music for a BBC Radio 4 documentary series and have had over a million streams on Spotify.

Having been made aware of the funding opportunity from from the Help Musicians* mail out  they decided to apply for the funding and submitted our application a few months ago to help with their Autumn tour and were delighted to find out they had been successful.”

Christine told us : We are delighted to have been awarded ‘Support to tour’ funding by Help Musicians to take our debut album ‘Hunter’ on the road this autumn. Not only will this funding help with some of the financial burden of touring but knowing people believe in our music really means a lot to us. We were so overwhelmed with the response to ‘Hunter’ which received stunning reviews and lots of national airplay including; BBC Radio 2, BBC 6 Music, BBC Scotland, BBC Wales, BBC Ulster and RTÉ Radio 1 and it even made it into the top 10 in the Amazon Folk charts!

So, 2022 is set to be an important year  for the duo, as they set out on their first major tour following the release of their spring 2021 debut album. ‘Hunter’.  The album has received stunning reviews and lots of national airplay including; BBC Radio 2, BBC 6 Music, BBC Scotland, BBC Wales, BBC Ulster and RTÉ Radio 1 and it even made it into the top 10 in the Amazon Folk charts!

‘A bright, lively collection of songs that plays so sweetly it evokes the sensation of a
summer folk festival’ – The Guardian

For more information about Christine and Alex visit: christinaaldenandalexpatterson.com

* For 100 years, Help Musicians has been providing help, support and opportunities to empower musicians at all stages of their lives.

As an independent charity they aim to make a meaningful difference to the lives of musicians, offering a wide spectrum of support which includes: Health & Welfare services, Creative development funding, ground-breaking research, a mental health helpline for the entire music industry and an incredibly popular hearing health scheme which aims to prevent hearing problems that would otherwise bring musicians’ careers to an untimely end.  “We’re passionate about creating a world where musicians thrive”