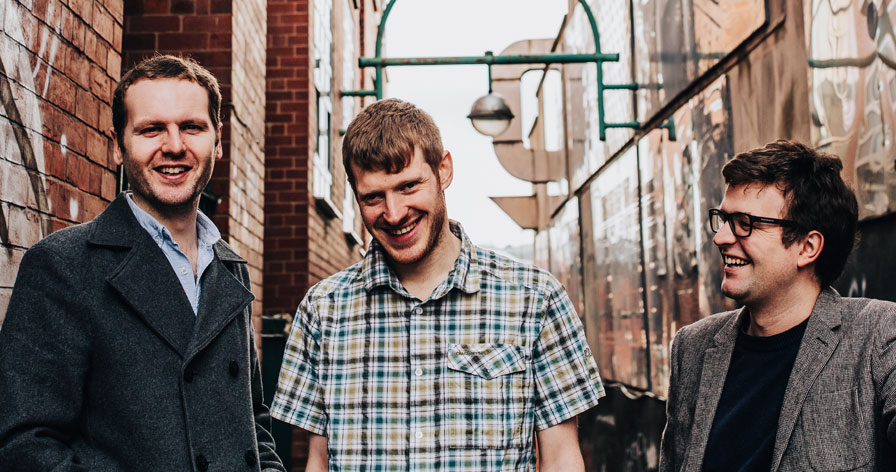 Stockton-On-Tees’ THE YOUNG’UNS were once again the big story of the evening as the nominees for 2018’s BBC Radio 2 Folk Awards were being announced at the beginning of this month.

The Co. Durham band, and Spiral Award winners, who recently released acclaimed brand new album ‘Strangers’ are actually already previous winners of two coveted BBC Folk Awards (Best Group in 2015 and again in 2016), were this time announced as nominees for two new awards – Best Album (‘Strangers’) and Best Original Track (“Be The Man”). The winners of which will be announced at the Belfast Waterfront on Wednesday 4th April (the first time the event has ever been held in Northern Ireland).

On the back of this great news, The Young’uns announced their brand new project, ‘The Ballad Of Johnny Longstaff’, an incredible new audio-visual UK tour for spring 2018.

Often performing completely unaccompanied by instrumentation, The Young’uns (aka Sean Cooney, David Eagle and Michael Hughes) will bring their unique sound to nineteen UK towns & cities on their ’The Ballad Of Johnny Longstaff UK Tour’ this spring, with tickets on-sale now.

THE YOUNG’UNS – THE BALLAD OF JOHNNY LONGSTAFF

“The Young’uns present ‘The Ballad Of Johnny Longstaff’ – a timely tale of a boy who walked out of poverty, a teenager who stood up to racism, a soldier who fought fascism and an old man who inspired a new generation.”

How the project came about …

“In 2015, a man arrived at one of our concerts with a picture of his late father and a story. His father’s name was Johnny Longstaff and what a story he had to tell. As a teenager, Johnny walked 230 miles from our hometown of Stockton-On-Tees to London in search of work and from then on bore witness to some of the most defining moments of the tumultuous 1930s including the Battle of Cable Street and the Spanish Civil War. Exploring Johnny’s story through his own spoken words with the recordings he made for the Imperial War Museum and having access to his never before published memoirs and his personal book & photo archive has been a labour of love for us. Three years later we have created a 90 minute show in which 16 original songs interweave with Johnny’s own voice against a backdrop of startling visuals to tell an incredible story. It’s not a story that glorifies conflict or imposes political views – it’s a story that oozes humanity, humour and fellowship.”

In the summer of 1939, as war clouds loomed over Europe, a 19-year old lad from Teesside went to the House of Commons to meet his local MP. He had just returned from fighting against fascism in the Spanish Civil War (to do so was illegal because of Britain’s policy of non- intervention). Hearing footsteps coming down the corridor he turned to see the figure of Winston Churchill approaching. The lad’s MP took the opportunity of introducing him. Churchill looked the teenage soldier up and down, took his cigar out of his mouth, and said ‘Would young men like you be prepared to fight against Hitler?’ The lad took a deep breath before he answered; ‘Mr Churchill,’ he said, ‘I’ve been fighting Hitler all of my life.’ His name was Johnny Longstaff.

This is the story of his life from the day it began in abject poverty in Stockton-On-Tees in 1919 to that chance meeting with Churchill in 1939. 16 original songs will interweave with the late Johnny’s own recorded voice to tell a remarkable story of one man’s impulse to react to injustice wherever and whenever he saw it. It’s a story of great humanity but also great humour as a teenager stumbles his way innocently through the tumultuous landscapes of the 1930s – from Teesside to London, then onto Paris and eventually across the Pyrenees into Spain (even though he didn’t even know where Spain was )