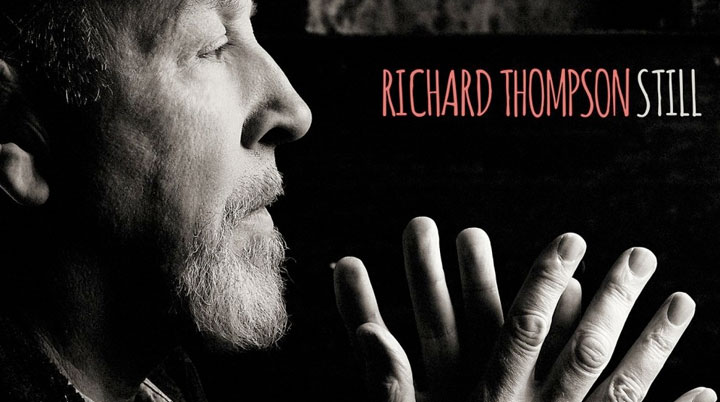 Still, isn’t a word I readily associate with Richard Thompson, there’s been an awful lot of Thompson around lately, three albums in a short spell- if you count Family an excursion into the creative talents of his nearest and dearest- as an RT effort. After heaps of reconnecting through the back to basics/yesterday of Acoustic Classics, so we arrive at Still. Sage like introspection is what you might expect from the cover which has our hero gazing into nothingness as if lost in contemplation, though if you’re expecting the contents to be spiritual, stuff to ponder or consider you’re going to be sadly disappointed. Instead what has happened is a move to record in Chicago with Jeff Tweedy –he of Wilco, lay everything down in blitzkrieg fashion, mix it rapidly, out and done in just over a week. Some work ethic, phew! However the results are significant, simply the best Richard Thompson has delivered in years, he’s on fire. Tweedy turns out to be an inspired choice, maybe more artists should record in loft apartments, though truth be told it’s because he’s such a perfectionist and knows his subject so well, yet never does Tweedy allow his appreciation of RT stand in the way of making a good song better.

Nobody could ever accuse Mr. Thompson of being a slouch in the composition stakes, though he as undoubtedly hit a purple patch, Still delivers everything you can recall that made him great and then some. Lyrically we’re back in prime territory with women, known, loved and lost, gallows humour, desperate characters on the edge, frustration meets romance in a back alley and both parties leave with a smile on their face. The music is remarkably British for an album conceived and created in the US, but then you can take the man out of Britain but you can’t take Britain out of the man- thank God. RT stills writes like he’s living in suburban London and recycling roots to create, well the skirl of She Never Could Resist A Winding Road a heartfelt lyric and a guitar break to die for, then we’re into the tale of an old hippie stranded in Amsterdam, Beatnik Walking its tumbling acoustics and harmonies before the loaded, heavy plea to Patty Don’t You Put Me Down, “don’t colour me cruel,” what has the poor man done?

The funky rhythms of All Buttoned Up foretell male vexation at a particular form of behaviour which thwarts the best laid plans, “ she talks about the weather/she keeps her knees together,” yet despite that yer man’s playing the long game, “ I’ll do the right thing won’t I?” More growling lead guitar and a pace fast enough to tire a Whirling Dervish, equally Long John Silver cannily remarks that not all pirates and sharks happen to frequent the oceans, you find them down your local high street as well. “ Don’t put your shirt on Long John Silver,” burrs Mr. Thompson financial advisor. Pony In The Stable sounds to these ears like it’s based on an old folk melody, I heard one time – could be Skewball – it’s bouncy doggerel of a high standard… hey I could go on and mention Dungeons For Eyes which has a brooding atmosphere and intensity which sits it in the same slipstream as Night Comes In.  After all that heavy ambience Guitar Heroes comes as light relief as Rich gets all nostalgic, playing up Les Paul, Chuck Berry and the Shadows in just under eight minutes.

Okay so maybe the album’s just a shade too long, maybe you could have chopped Josephine without too much fuss but everyone involved here is pumping iron on every level. You won’t want to stop playing this album for days if not weeks, it should come with a health warning it’s that bloody good. Guaranteed to take up residency in both psyche and CD player. Master class.