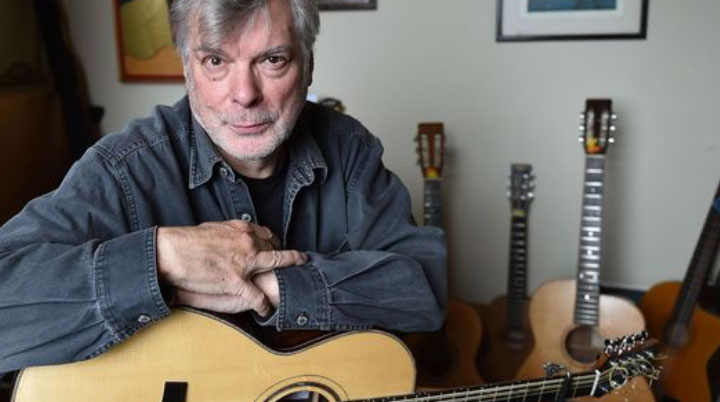 Distant Days is a solo acoustic retrospective which sees Steve Tilston reworking some of his most treasured self-penned songs, in addition to three previously unreleased guitar instrumentals, offering a unique insight into his musical journey since the early 1970s.

Insightful lyrics, ravishing melodies and deft guitar work continue to showcase an artist at the top of his game, each and every song and instrumental standing firm, assured and fully realized in its own right. For Distant Days , he sings and plays both acoustic guitar and banjo.

In 2015, one particular event in Steve’s life came to the forefront in the UK and international mass media. An incident in which a letter sent to him by John Lennon back in the early 1970s, and not received until forty years later, was turned into the acclaimed movie Danny Collins with Al Pacino playing the ‘Steve Tilston character’, Steve found himself on the red carpet in London with Pacino and sharing The One Show (BBC 1 TV) as DJ Andy Kershaw interviewed them both about the Lennon letter and the movie. Several excellent features in such major newspapers as The Guardian, Daily Mirror and the Express, and radio interviews with the likes of Mark Radcliffe for The Folk Show (BBC Radio 2) have not only discussed this but also looked at Steve’s excellent musical career since his first album back in 1971.

A truly great songwriter whose timeless songs are rooted in tradition, Distant Days includes brand new recordings of songs from Steve’s incredible back catalogue including ‘The Slip Jigs And Reels’, ‘I Really Wanted You’ and ‘Let Your Banjo Ring’.

‘It has been 42 years since Steve Tilston released his muchpraised debut, An Acoustic Confusion (Rod Stewart apparently ordered a box of the albums), and it remains a mystery as to why he is not far better known today. He is, after all, a fine and thoughtful songwriter and singer, and a remarkable guitarist’. THE GUARDIAN****