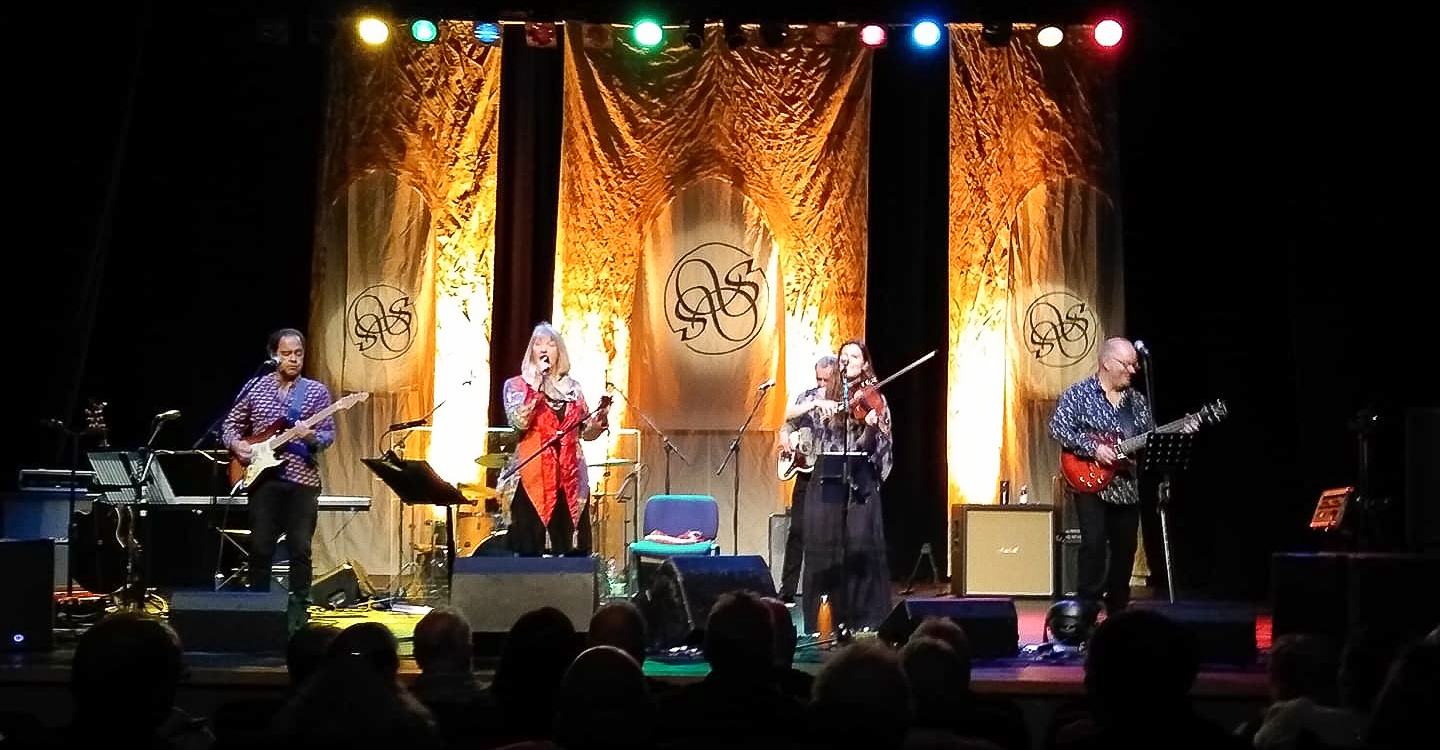 Technically 50 years old back in late 2019, celebrations had to be put on the back burner until that pesky Covid was largely dealt with. However with typical tenacity, Steeleye Span are once more out on the road, determined to party with their audience. Adjustments made for time lost, changes in membership, rotation of set lists and a fresh, breezy energy amidst the players. There’s plenty of room for optimism as Simon Jones found when he joined them for a gig in Buxton.

” I think that people have always sung, they’d sing at work, as they were going about their daily business, in their homes and especially in social situations and at holiday time like Christmas,” Maddy Prior says, ” I mean I just can’t believe that there hasn’t been a common stock of songs at any significant point in history really. And if there wasn’t song then there were tunes for dancing…”

Maddy and I are discussing a book we’ve both read concerning the background and development of folk song, your scribe nods sagely, agreeing with much that she says, not just because she’s Maddy Prior the focal point of Steeleye Span but because she’s got experience of working with traditional sources for a lot longer than the band have actually been merging them with contemporary sounds.

” They’re very durable the old songs y’know,” she continues, ” I hope that there will always be musicians who will experiment and reshape them, we’ve always moved them into something else, that’s what we’re known for really. The only thing that harms them is not using or performing them…. then they’ll remain as museum pieces.”

Steeleye Span have been repurposing and restructuring the folk material of the British Isles for some 53 years – with time out for a short lived split around 1978/79 – and all through have stayed true to the mission statement, they’ve done it using a variety of styles and approaches which proves  not only their durability but also their character. More relevant is the fact they’re doing it still retaining a dedicated and sizable following, who’re eager to pack venues like the Opera House at Buxton to hear Steeleye’s songs and tunes happy in the knowledge that Span continue to thrive. Count me among them.

” The tour’s been going really well,” confirms guitarist/all round instrumentalist Julian Lipman,” of course we did a few dates at the end of 2021 as things were getting back to normal and those gigs had an understandably reserved atmosphere compared to what we’re finding on this run of shows.”

And if you wanted proof of that then the Opera House delivered, Steeleye’s faithful have turned out in significant numbers taking until 30 seconds before the band stroll on stage to finally fill the seats. And it’s with a merry ” you alright?” from Maddy that the whistles and cheers begin, ” how many of you have got your original tickets from two years ago?” she smiles. Judging from the response a goodly proportion, showing the fans’ stickability and Steeleye’s healthy relationship with their concertgoers who hoover up not just the latest Steeleye product but side line acitivity  from Julian and violinist Violeta Vicci both during the interval and for over half an hour after the gig finished. ” It’s very much a symbiotic process,” confirms Maddy,” I’ve always been hands on with the audience, they are always pleased by how open we are. Taking time out to speak to them is important too as you learn so much. That can be a very positive thing.”

Recently Steeleye have been a very large seven piece, the sound shifting, louder and definitely more to the heavier end of the folk rock equation. ” Personally I think what we play now is rock folk,” considers Andrew Sinclair, lead guitar, ” Steeleye produce a widescreen soundscape which comes from our mix of ages and experience I guess.”  The departure of long time bassist Rick Kemp ( late 2016) signalled a shift in the group’s sound, Span never replaced like for like when individuals left the band and had already replaced Pete Zorn, who sadly passed, with Andrew Sinclair and veteran fiddler Peter Knight with Jesse May Smart, both of who brought down the band’s average age considerably. Rick’s departure was key; ” it took took two people to replace him,” Maddy confides with a grin.

In came jazz rock bassist Roger Carey as well as Benji Kirkpatrick – son of John, ex Bellowhead –  who’d already worked with Maddy in her solo guise, he brought with him not only a strong vocal but assortment of amplified strings, mandola, cittern, banjo and guitar. That helped sculpt a big, individual sound; Span had been rockist back in 1976 but this band were fuller and when firing on all guns produced a melodic melee which’d pin your ears back.

The” Est’d 1969″ album even got them attention from the mainstream music press their name once more on the cover of magazines in the high street.  Sadly it wasn’t to last, Benji Kirkpatrick left in January this year but hadn’t played with them since 2019 when the pandemic meant music ground to a halt, he’d appeared on a couple of live releases and one studio album. His departure meant the absence of the songs on which he sang lead but also the folksy sounds his strings produced. Steeleye answered that;  ” I got an electrified mandola to keep an element of Benji in there,” Julian tells me, all credit to him as he’s taken on that angle as well as his keyboard, electric and acoustic guitar duties, handling them all with flair and aplomb. For a significant portion of the second set tonight Span were satisfyingly rock, the charge being led by Andrew Sinclair’s screaming lead work and Violeta Vicci’s sonic fiddle extemporisations, the interplay was quite something. The energy and excitement shared between the musicians on stage was palpable. 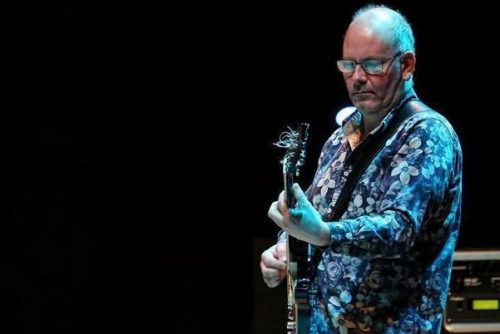 Andrew gets ready for the next ‘screaming lead.’

Pre-pandemic Steeleye were gearing up for a 50th anniversary tour blow out, they’d already  rehearsed/ later recorded a first set which presented the whole of their seldom heard debut from 1969 ‘Hark! the Village Wait,’ – which sneaked out under the radar on RCA after the band’s first line up sundered before they could play a gig. That left the album high and dry, the group themselves moving on to a new line up and label, ‘Hark,’ in the meantime became ” a bit of a stand alone really…” Maddy relates, ” I’ve always thought of it as a worthy experiment, the music on it is wonderful but it doesn’t relate to anything else that we’re known for. I enjoyed the harmony singing I did on it with Gay (Woods,) but we only really explored that again decades later when she re-joined.”  Atypical of Steeleye albums, ‘Hark! The Village Wait,’ remains a signpost on a road not travelled, true the band did play the odd song from it, the most obvious being ‘Blackleg Miner,’ which was turned inside out with funk bass and wah wah pedal in the 80s. The closest it came to being revived was at the War Child concert September 1995 when 90% of Steeleye membership reconvened for a charity gig, four of the original five members recreated several tracks with Terry Woods the only absentee: check out the ensuing live album for proof of the material’s enduring potency.  Yet it wasn’t until 47 years later that Span decided to dust it down and reimagine it for the 21st century.  ” We couldn’t play it the same, some of us weren’t even born when it was released!” No doubt it was meant to be released – all things being normal for the 50th anniversary. Things in early 2020 were anything but normal – the live ‘Hark!’ was put on the shelf.

Buxton in 2022 and Steeleye have their maths spot on, it’s 50 years since ‘Below The Salt,’ hit the racks of your local record emporium. The first album by what is referred to by some wags as the ‘classic’ line up Prior, Hart, Knight, Kemp and Johnson, it’s a rousing mix of acapella, jigsy, medieval sounds underpinned by gutsy lead guitar and bass – no drums here. Span play the album in it’s entirety, ” but not the album order,” grins Miss Prior. The present six piece show just how much they can bend, alter and change the songs and imbue them with a new vibrancy yet retain the original atmosphere and poignancy. ‘ Saucy Sailor,’ being a case in point, still that beautiful circling guitar and fiddle driven counter melody followed by five minutes plus of extemporisation which builds to a climax before drifting on a breeze to the softest conclusion. Roger Carey’s interpretation of ‘John Barleycorn,’ still has a rustic charm, as well as a recording of the late Tim Hart with an opening, short narration. Bigger, heavier numbers like ‘Royal Forester,’ ‘Sheep Crook & Black Dog,’ suited Steeleye’s current modus operandi, both benefitting from the frisson and animation of Span’s more recent additions. However in a nod to the fact they’ve turned in half a century of distinction, ‘Hark! The Village Wait Live.’ has finally been rescued and issued.

Maddy Prior and I are still talking folk song, the last of the crowd drift away. ” I suppose you could say that the songs change a little each time they’re played, if you take the bigger picture then each version of Steeleye has played the same songs but differently. Certainly ‘ Cam Ye O’er Frae France’ has had multiple settings and variations, that’s one we’ve always done. Things never stand still in traditional music and Steeleye is the same. Like the material we work with or let influence us, the band is constantly moving and shifting.”

So Span continues with passion and vision then?

She smiles broadly, ” We’ve never rested on our laurels, there is always a new challenge and an audience for what we do. That suits us very well.”

Steeleye Span 2022 in fine fettle, relishing whatever tomorrow may bring.

‘Hark! The Village Wait. Live’ is out now on Park Records. parkrecords.com