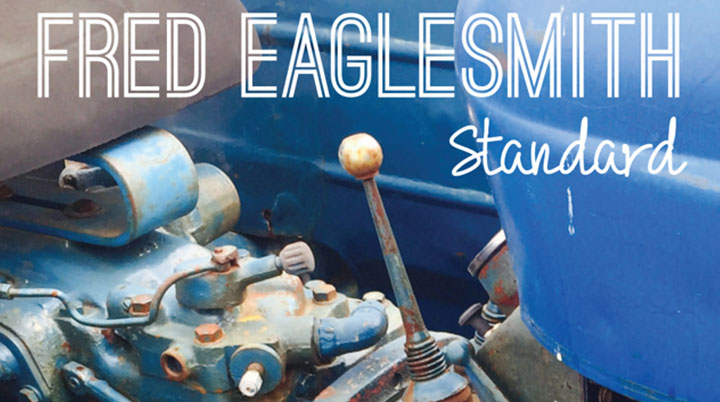 He’s a rare visitor to UK shores but has just released ‘Standard’, his 18th album.  He has packed the crowds into theatres, charity picnics and even train trips across his homeland of Canada. Yet, Fred Eaglesmith says of his new record, “The album is more narrative than musical. The vocals have not been re-tuned, either automatically or manually and sometimes they are a little sharp or flat. On some of the tracks you can hear the quiet hiss of reel-to reel-tape. It is a less than perfect album.”

Of course, his tongue is in his cheek when he says this as it’s just how he wants the music to sound. Being so lo-fi such that you feel you’re in the room with him and his fellow musicians. Simple backing with drums, guitar, bass with harmonica, ukulele, banjo, trumpet, melodica and all manner of musical instruments spread around in a sparse and atmospheric way.

The songs on ‘Standard’ return to familiar themes from his back catalogue where he’s never far away from a farm or seeking out love. Opening up with ‘Twin City Mini’, this is the story of an antique Minneapolis-Moline tractor, rusty and barely running but still in the parade. ‘Thermostat’ has him singing of wanting to ‘warm up that old machine’ in a manner that could be read in various ways but continues with that idea of looking for perfection in the non-standard. This is best summed up in the song ‘Steam’ where a 65 year old is obsessed by older technology to the point that ‘he thinks the internal combustion engine is a conspiracy’. As anyone who has been foxed by technology will attest, often simple is best.

So, by now, you’re probably wondering whether there is much to this record other than an interest in the spare parts of various mechanical machines. However, that would be to miss the underlying love in these songs. Something that is more obvious on ‘Tom Turkey’ where he sings of the farm animal that calls and calls in a broken hearted way for the woman who left the homestead. It’s a theme of lost love that comes around again on ‘Flames’, a soulful lament to an ex-lover, as well as on ‘Miss Mary Jane’. Whilst on ‘Off The Dam’, the character in the song finds himself waving goodbye to his love. All songs that offer a nuanced take on how love is even harder to make work than a beat up old tractor.

Ploughing his own furrow, Eaglesmith is to farming what Springsteen is to the car industry. When considering the approach to this record, he says “All of this, of course, might have been corrected with a computer and a mouse. But as is often the case with old machines, there is no manual. So you simply have to guess at how to set the timing. Sometimes you’ll swear to yourself that guess is better than the actual specifications. Sometimes you’ll just have to be happy with the imperfection.”  Personally, I reckon that the non-standard ‘Standard’ is the almost flawless work of a great songwriter who always chisels a new angle to familiar tales.