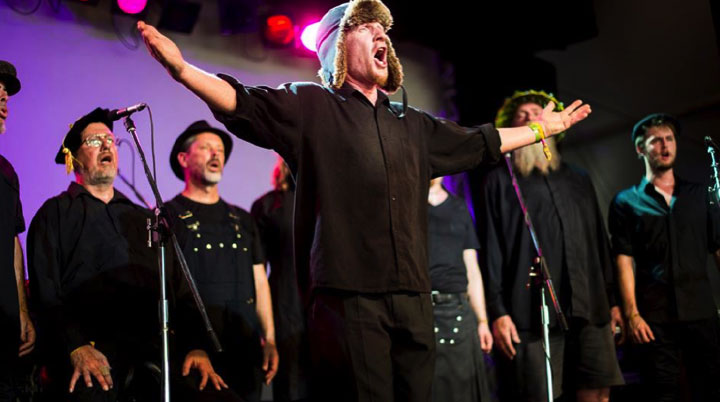 Australia’s weird and wonderful black-clad choristers are gearing up for another biennial blast round Britain.

Following triumphant UK tours in 2006, 2007, 2009, 2011, 2013 and 2015, they are busy packing multifarious hats in their native New South Wales, ready to whisk themselves away from the eucalyptus-infused Blue Mountains for a whistle-stop run of nearly 30 performances in England, Scotland and Wales – a veritable bounty of big summer festivals, wondrous workshops, and even a top secret Mystery Gig!

In their 17 th year and with five studio albums to their name this is a line-up that totally warrants the term ‘unique’. Describing themselves as “equal parts monk, Visigoth and village idiot” they are not afraid to send up the stereotypical male to side-splitting effect. Says Spookmeister (and sole Kiwi) Stephen Taberner (he of the deerstalker hat): “The chorale attempts to explore the paradoxes of latter day masculinity with unbridled enthusiasm, a pleasing array of deep harmonies and a gentle wink towards posterity. We’re trying to master the impossible art of being both musically immaculate and blitheringly stupid.”

Hotfoot from their most ambitious Australian tour to date, the mighty 15-strong line-up’s UK show will run the bizarre gamut of surfing, gluttony, tools, mastodons, Bee Gees, body parts and how to scare off hostile neighbouring tribes – songs from their album The Spooky Man in History and the back catalogue but also from their snug latest CD Warm – an unadulterated album of shiver-down-the-spine Georgian songs.