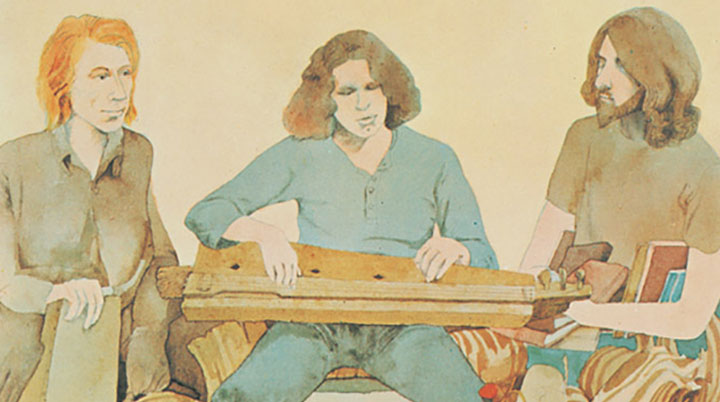 Currently an original copy of this item in decent playable condition will set you back a couple of hundred pounds or so. Good job then that here’s a new reissue through Bread & Wine/East Central One at least the curious can hear Clive Palmer, John Bidwell and Mick Bennett for a reasonable price.

‘Spirit Of Love,’ is always quoted as a classic of acid/psych folk whatever that is. True, these guys froze in semi poverty in an old caravan with no electricity or running water somewhere in the backwoods of Cornwall, making occasional forays to folk haunts in pubs and bars around to play their mesmeric, eastern acoustic music and probably get warm. It’s thanks to Jo Lustig and Ralph McTell that they ever got to record when the former asked the latter to recommend a group he’d like to see make an album. CBS put up the dosh and with McTell as both flag waving champion and producer, ‘Spirit of Love,’ was underway. 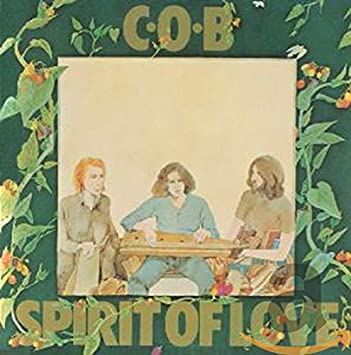 To say that the results are unique would be somewhat missing the point, the sessions appear to have been a loveable shambles with McTell often perplexed and frustrated by the band’s laid back work ethic. Soldiering on he managed to coax out of them an album filled with woozy tunes, spiritual lyricism and a hippy naivety, which occasionally catches fire among all the drifting and wafting. The title track is one of the best cuts with an agreeable harmonic female chorus which includes the long lost Gillian McPherson as well a chunky rhythmic chug. On the other hand ‘Soft Touches Of Love,’ sounds exactly like an Incredible String Band number which went west! Instrumentally Palmer’s ‘Banjo Land,’ is a decent slice of jug band music that can’t help but raise a smile with added sound clips of the seaside, likewise ‘Scranky Black Farmer,’ which includes the dulcitar a musical mutant invented by Bidwell, as well as an earthy, rough vocal over a chanted refrain.

Clive Palmer of course had been in the first ISB so the musical mix here does reflect that slipstream, I know certain people who prefer this to the esoteric adventures the String Band undertook when Palmer left. Ralph McTell in his great sleeve notes mentions that COB were a challenge and that he went on to produce their even more idiosyncratic second album, however he remains fiercely proud of what he and they created.

1971 was a different age, but ‘Spirit Of Love,’ is a reminder of a time when major record companies took a chance and invested in music which whilst out there was also possessed of a certain innocence and charm. It remains a cornerstone release in the story of the Cornish folk scene and for all its idiosyncrasies there is charisma and allure if you care to give it time and consideration.

Available from on line platforms/sources and music stores.