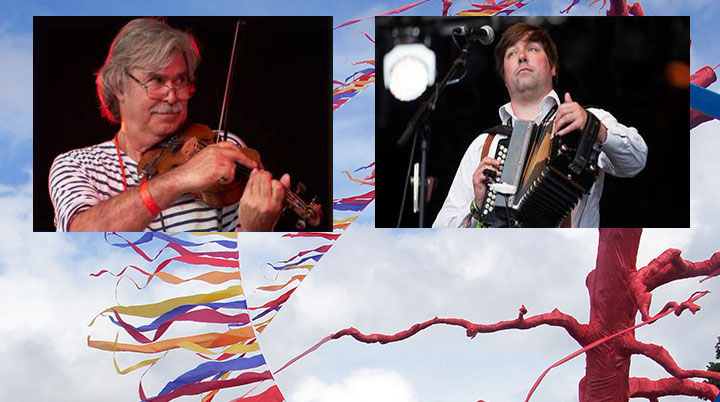 A unique collaboration between folk legends Peter Knight and John Spiers has been announced for East Anglia’s festival FolkEast. The three day festival at the glorious 300-acre Suffolk estate of 16th century Glemham Hall will witness the debut performance of the pair on the Broad Roots stage on opening night (August 19).

The content of their set is largely under wraps but is likely to include English, Galician and Quebecois tune sets as well as improvised music. The pair have been busy rehearsing at Spiers’ Oxfordshire home with Spiers tweeting:

“Great fun today playing tunes with Peter Knight seeing what we can come up with for @FolkEast in a few weeks time … Sounding good!”

On his website Peter Knight wrote: “I’ve been booked to play one of my favourite festivals and so has John Spiers. It had to be done. We will be playing a set together – I’m loving it. He should be called John InSpires. What a lovely player.

“During the rehearsals I recorded John playing some tunes, so I’m playing along with them to learn them, before weaving some of my own musical thoughts and expression into them. So pop along to FolkEast festival and check it out.”

Few fiddlers can hold a candle to Knight whose presence has enriched the British music scene for more than four decades.

Since his departure from folk-rock’s iconic Steeleye Span at the end of 2013, Knight has turned his full attentions to his boundary blurring Gigspanner trio conjuring up a completely distinctive sound.

Now living in south-west France, the London-born musician will also be centre stage at FolkEast for “An Audience with Peter Knight” which he has dubbed ‘Everything you ever wanted to know about Steeleye but were afraid to ask!” and he will host a violin masterclass.

Hugely popular John Spiers is one of the leading squeezebox players of his generation. With the final curtain falling on the mighty multiple award-winning band Bellowhead as well as the duo Spiers & Boden, “Squeezy” is busy pursuing a new solo route.

‘Britain’s best known exponent of melodeon and concertina’ will also perform a solo show at FolkEast and host a melodeon workshop.

Other nominees appearing at FolkEast are Eliza Carthy (Folk Singer of the Year); Katriona Gilmore and Jamie Roberts (Best Duo) Dan Walsh (Musician of the Year) and Sam Carter (Best Album nomination for Salvor – his False Lights collaboration with Jim Moray) – an act whose first ever appearance was at FolkEast.

Advance weekend tickets are available price £115(adult), £98 (full time students, senior citizens) and £65 for Youth tickets (12-17 year old).Family weekend tickets for two adults and two 12-17 year olds are £320. A great offer sees free admission for children aged 11 and under and optional camping is included with all weekend tickets, with a £25 charge for campervans and caravans.

Located close to the A12, the festival will also be running shuttle buses to the site from Wickham Market station.